We've not posted a blog update for a week, that must be some kind of record! The truth is that we had retreated into the sanctuary of Germany for a few days to recharge and spend some time planning our next move. That's not to say we're defeated, but Poland has been incredibly busy which in fairness could be due in part to our timing - last week in July. We've struggled to find anywhere we would be comfortable Wild Camping and we have relatively low standards for doing so. The roads here are pretty manic and single carriageway affairs plainly not suitable for the volume of traffic, but given that many new motorways are under construction revisiting in 3-4 years, it'll be a different experience I'm sure.

We have found some gem's such as Poznan, one of the oldest cities in Poland. The brightly colored merchants houses dating from the 16th century rivaled similar ones we have seen so far in Stockholm and Bergen  and were certainly impressive. Poland seem to do town squares on a large scale, Warsaw's was Europe's largest and this one to us didn't feel far behind.

As we were passing en-route to Germany (and could see it from miles away) we thought we'd call in and see Big Jesus. Apparently, the biggest statue of Jesus in the world? It was certainly big. 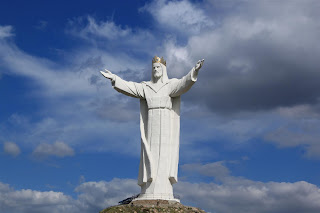