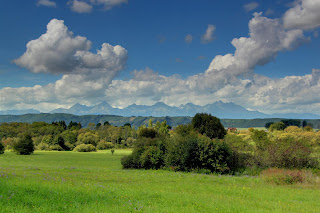 We've sort of ended up doing a big C around Slovakia and from our Wild Parking place we can once again see the Tatra's where we spent our first night. Slovensky Raj is renowned for its 'Gorge Walks' - well, after doing them I can tell you they are much more like Go Ape! but without the nets!

After spending a quiet night wild camping at a small car park off a terrible road (GPS: 48.94267,  20.34808) the sun through the skylight woke us up early to go and start our walk. Not early enough however, the little man in the hut was delighted to have caught us and we duly paid our €3 plus €1.50 each towards the "infastructure". If only we'd got up 15 minutes earlier! There was an optional 20c per person per day 'Mountain Rescue' insurance which should have given us a clue for things to come.

The first part of the walk is unassuming and positively relaxing, following the path of an impossibly clear river flowing over white stones. You don't see many Slovakian's carrying bottles of water, they all drink directly from the streams. 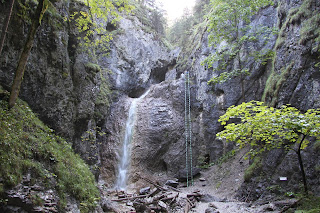 There were a few stepping stones, wodden slatted bridges and then there it was... a 100m high ladder! Not quite what we were expecting and I'm sure there was a few choice Slovakian pharses from the couple behind us also. But, with Sophie going first, we made it to the top when we were confronted with our next obstical with no chance to turn round! The 'path' continued up the waterfall in the form of a wooden slatted walkway which appeared to be wedged into the rock with wooden posts and so it continued until we reached the top. Sophie, again, did incredbly well not complaining once except when I bounced on the beams (by accident of course!).

The views here were not as spectacular but we did manage nearly 11 miles in a little under 6 hours which goes to show just how steep our last walk was. We were treated with a dramatic view of the Tatra's and as tempted as we were to go back and spend some more time there we must crack on with our tour.

The next day we headed for a Laundrette and while parked outside deciding if it indeed was what we thought it was (it wasn't) a Russian registered Fiesta pulls out in front of us and a guy jumps out and is stood by Sophie's open window. "Are you Camilla and James!?" he asked. "Err, no" we replied. It turns out Camilla and James have volunteered to work on his farm for a few weeks as a break from traveling around Europe in a van and were supposed to be in this village this week. So if you're reading this, there's a Russian guy looking for you! 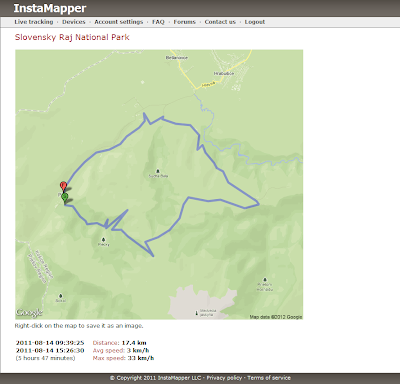