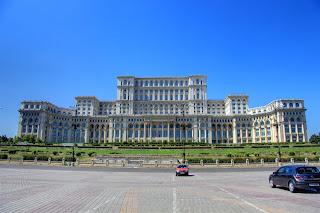 We arrived in Bucharest on the Saturday but didn't fancy visiting the capital until the Monday, which posed the problem of where do we stay. We made our way to the campsite at the north of the city - Camping Casa Alba. I use the term campsite in the loosest sense of the word, since it is actually a 1970's holiday cabin type campsite with a carpark where caravans and motorhomes can stay. There was a large Belgian tour there when we visited. However, should the mood take you, you can park round the back of the restaurant Casa Alba in the large park area behind - we did so for two days, only moving to the security of the "site" to leave our van to venture into the city. Cost £16/day with EHU.

We were going to have a guide for the city, but we've misplaced his details (Michael, get in touch!) so we had to go it alone. We tried tried the bus for a couple of stops but decided when we had to change we would just get a taxi instead. Taxi's are all Dacia's (naturally) and are between 1.39 and 1.69 LEI per KM or about 60p a mile. Our driver was sipping whiskey and smoking for most of the journey but we arrived in central Bucharest in one piece, physically at least.

The traffic could be likened to that of St Petersburg and there is an almost complete absence of tourists of any kind. While we were getting our bearings Sophie spotted a modern looking hairdressers and stopped so we could both have a cut - Sophie's first since home and my first since Estonia. Being a trendy Toni and Guy type outfit we were both treated to a wash, blow dry and cut and finish for just over £20 for both of us - it felt good to have some TLC!

We made our way to The Palace of Parliament which is undoubtedly Bucharest's #1 landmark, a huge building of 1,100 rooms and 12 stories tall and costing over $10bn to build. It's construction was never finished and much of the interior remains empty after the regime change of 1989.

While we were stood admiring the Palace when we were passed by an open topped Sightseeing Bus. Definitely not our usual method of seeing a capital, we usually rack up at least 5 miles on foot but we decided to hop on and see where it took us. The fee was modest (£5 each) compared to some tours and we did a lap and a half around the sights. I'd love to get into the thick of Bucharest one day but I think we're a little tired of big cities and this trip has defined that we are very much country / outdoors people - if we didn't know that already.

We spotted a Hard Rock Cafe and, having never visited one anywhere, stopped off for some tea - a Legendary Burger and a Rack of Ribs for Sophie. 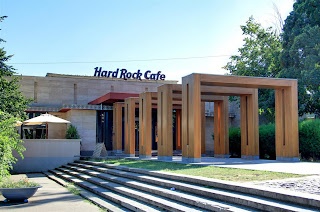 We also stopped off at Peles Castle in Sinaia on the way down to Bucharest which was built in 1873 and completed in 1914. The sun hasn't stopped shining for the past 2/3 weeks and the day we visited wasn't an exception.