A+ A-
Print Email
You can't really go to Poland without visiting Auschwitz and so we made sure it was ranked high on our to do list for this trip. Our greatest fear was that it was going to be commercialised; I couldn't begin to imagine what the tourist tat sellers would be peddling but I'm sure they'd think of something. 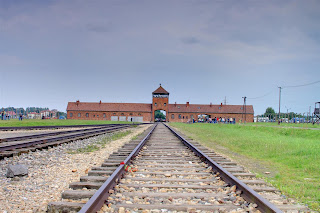 There were in fact three Auschwitz sites but only I and II remain, the site pictured above that is the "famous" image of Auschwitz II (Birkenau) and was our first port of call. This site is free to get in, but if you visit between 9am and 3pm you need a guide to do so. A free shuttle bus connects I and II together, however as we arrived late in the day we went to II first and parked for free outside. We're currently parked outside I with 15 other campers for roughly £5 for 24hrs (GPS: 50.02704, 19.19924) and intend to visit tomorrow so we'll update this post when we next get online.

It sounds like an irrelevant and highly irrational comparison but it reminded us of Pompeii - both are somewhere we studied at school and had recognizable landmarks from that time but neither pictures or videos manage to communicate the sheer scale of the place. While many of the buildings were destroyed towards the end of WWII, with only a few sections being faithfully restored, even without their wooden cladding the concrete bases and brick chimney stacks serve as a reminder of just how many people were housed here.

We've read reports of an eerie silence and lack of birdsong in the compound. I'm happy to report that wasn't the case, wild flowers and animals are present in the compound and the tourists are some of the most well behaved you'll see - with an exception of a few 'posing' for photographs which we thought was a bit distasteful.

There are two types of buildings used to house prisoners, those purpose built and those which were converted from military stables. Both are equally harrowing but my preference would have been the stables if only for the more elaborate looking heating arrangement which ran down the center of the room.

At the far end of the compound are the gas chambers where the holocaust took place. These were blown up with diamante and destroyed before the end of the war and have been left in their original post-blast state. I don't think they need any further commentary.


We sort of did it the wrong way around, but actually we're sort of glad we did. 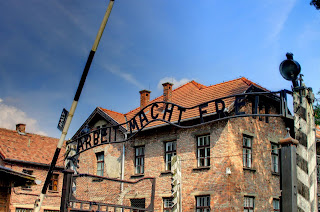 Auschwitz I is the museum the wrong way around but it doesn't matter too much. The same rules apply, if you enter between 10am and 3pm you need to do so with a guide. You are charged 40zt to enter and a 5zt deposit for your audio headset. However, when we returned for a second walk around after 3pm we weren't challenged for tickets so perhaps the whole site is free after this time? That said it is useful to go with a guide who will also acompany you to Auschwitz II should you wish via the free shuttle bus.

The tour today was pretty harrowing. There are some exhibits on display which really hammer home the human aspect of the suffering; seeing buildings and bucks is one thing but seeing a room filled with some of the  7 tons of human hair which was discovered is quite another. You know you're going to see piles of shoes and spectacles but when you get there and you see them the effect it has on you regardless of the mental preparation, these can all be found in the 'evidence' block.

Many of the buildings on the site have been turned into exhibitions for each of the countries who had citizens exported to Auschwitz however block 11 shows you how some of the medical experiments and tortures were carried out. There are also incinerators for the human remains following from the gassing, the walls still black with soot.