A+ A-
Print Email
On the 8th of April 2011 we left our jobs and set off on a 12 month tour of Europe in our Adria Twin camper van. The trip would take us 23,000 miles and through 21 countries in Europe, to Nordkapp at the top of Norway, through Eastern Europe to Greece and across to Spain and then Morocco.

We would highly recommend both this route and similar timings to anyone who wants to get a flavor of each country with a view to perhaps re-visiting their favorites in greater depth in the future as we do.

The map below contains all of the information for where we have stayed during our 2011-2012 trip. The best way to view this map is to click here to open Google Maps where you can click on the icons and navigate back to the relevant blog post concerning its location.

View Europe By Camper 2011 In Full in a larger map


The first country on our hit list was Denmark, deliberately missing out France and Germany for anything other than a pit stop. Our reasoning for this is that as a UK resident these countries are fairly close to home and could be explored fully in the future, with our time better spent in slightly more distant countries.

There is an obvious route through Denmark and on to Sweden across the Øresund Bridge. We made Stockholm (a must see) our most northern point for Sweden and turned back west to enter Norway through Oslo, before tracing a coastal path north through the Fjords. By mid-May many of the main tourist / scenic routes (named Nasjonale Turistveger in Norway) are starting to be opened and for us we were actually on them just hours after the barriers had been lifted - its certainly worth checking this our before travel.

After approaching 4 weeks in Norway we reached Nordkapp which for the sake of argument is the most Northern point you can access. It is here you meet all the motorhomes you didn't meet on the rest of your trip and you realise just how vast Norway is.

From here the obvious way is south through Finland. Trees, lakes and midges are the three most memorable things from this part of the trip and I think we could have tried a bit harder to find some of the gems Finland is sure to offer.

While in Helsinki we stored the van for three days while we took a visa free side trip to St Petersburg via the St Peters Line ferry. Driving to Russia wasn’t an option as fully comprehensive insurance is virtually unobtainable and besides, have you not seen all the Russian car crash videos on YouTube!? This side trip should be very seriously considered, its well worth three days out of your schedule to follow it and fellow travelers who have contacted us who followed suit also agree.

Back in the van and another ferry, this time to Estonia’s capital Tallinn. If you are considering Scandinavia, but are somehow put off by the prospect of Eastern Europe - don't be. After the eye watering prices that Scandinavia offers, Eastern Europe appears cheaper than ever. Alcohol is dirt cheap, you can eat out without looking at the prices and your dwindling store cupboards can be replenished. If like us you are on a budget, Estonia (or Tallinn at least) allows you to tap into Scandic cuisine at almost Mc Donalnds prices.

There is a well trodden route through Estonia, Latvia and Lithuania joining the capitals Tallinn, Riga and Vilnius - all offering safe havens in the form of City Camps. Should you deviate off this route (and we highly recommend that you do) then the roads do deteriorate, so its worth doing a bit of research about which sights you wish to see. As a rule of thumb, roads deteriorate faster the closer to the Russian border you get, but motorways are very good indeed.

Poland is a country we didn't warm to especially, but that could have a lot to do with the timing. It was August by this point and the roads and towns were busy. Auschwitz is somewhere I think everyone should visit. We entered Slovakia since we've already visited Czech, but if you haven't Prague is well worth a visit.

Poland and Slovakia share the same mountain range, the Tatras, but by comparison the Slovakian side was quiet and idyllic. We spent much of our time in Slovakia hiking and taking advantage of the well marked trails and Ski Lifts which serve to provide easy access to the mountain ranges, before visiting Bratislava and exiting via Hungary.

We parked in in Hungary for a couple of days (having previously visited Budapest and Lake Baliton) before entering Romania via a relatively quiet border crossing near Satu Mare. Romania isn't so much a holiday but more of an adventure but there is a great number of largely dutch owned campsites which are little more than a driveway or a back garden but all adds to the flavour of the country. We traveled the Transfaragen pass North to South, visited Bucharest and then headed to the Black Sea coast before crossing into Bulgaria. By now we were tiring from capitals and I regret to say we missed out Sofia. Having stayed almost a week at British owned Camping Veliko Tarnavo before crossing into Greece.

By now our pace was slowing, we had traveled 3/4 of our total mileage (almost 16,000) and arriving in Greece in September was perfect timing. The weather was warm (as much as 40 degrees) and the beaches were totally deserted with not a package holiday maker in sight. In all we spent 10 weeks in Greece, spending just two nights on a campsite to visit Athens and to do some washing. It was an idyllic life which felt like it could go on forever, but by December it was cooling off and so we board the overnight Ferry from Patras to Ancona, Italy.


Having visited the east coast of Italy before and with the weather cold and foggy, we spent just a week travelling up through and across to the south of France. Here we met Adam’s mum and dad in their Autotrail and hugged the coast into Spain where we joined Sophie’s mum and dad for a family Christmas reunion at their rented villa (we parked outside!).

All through the trip we had thought about visiting Morocco and after exchanging a few e-mails with Catherine and Chris from The World is our Lobster we decided to go for it. This turned out to be the highlight of our trip and the 6 weeks in Morocco simply flew by and was the perfect ending to a trip that could have potentially plateaued in Spain.

From here, the only way was up and home to the UK - in all taking 322 days. For more statistics and a country by country breakdown of mileage and expenditure see our blog post Touring Europe for a Year - What did it cost?

What would we have done different?
Had we been able to get Fully Comprehensive vehicle insurance for Albania and Bosnia we would have traveled up through here and into Croatia rather than getting a ferry from Greece. Of course, had we owned a cheaper van, then we could have risked it on Third Party / border insurance - but with our vehicle that wasn't an option. Insurance for Serbia is now included on many policies, but it wasn't on ours in 2011 - so we missed that out for the same reason.

Aside from that, probably not a lot!

Largely due to our budget of under £10,000 we engaged in a lot of wild / free camping. By having a vehicle under 6 meters (2mm under, at 5.98m!) we saved about £300 on tunnel, bridge and ferry tolls alone, but more then that being able to fit into a regular car parking space massively opened up our wild camping and day parking opportunities.

We did use campsites in cheaper countries, for visiting some capital cities and when we ran out of clean clothes and a launderette wasn't practical. It’s all about what you feel comfortable with but we believe once you close your blinds you could be anywhere!

The vehicle we went for was a 3 year old Adria Twin based on a Fiat Ducato. This was a fairly expensive vehicle (about 3x the cost of the trip itself) but paid for itself in as far as we only lost £1k in depreciation thanks to buying private out of season and selling private at the start of the season.

The van we used for this trip was a 2007 Adria Twin. We opted for the 2.3 (120bhp / 6 Speed)  model fitted with Cruise Control and Air Conditioning however the feature we were most impressed with was the fact is wasn't white! Being 5.98m long we also passed for the lower tolls in Norway and Denmark meaning we saved over £300 since prices double as soon as you exceed 6m.

We wanted a fixed rear bed as we find having to make up a bed all the time really tiring and the under storage for two peoples clothes for all weather conditions, shoes, coats and general supplies were excellent. We made a number of Modifications and Improvements to the van prior to leaving to give us a little extra space and to sort out some of the niggles and we have found that the van has stood up well to being used daily for the last 7 months. We will be writing a full review of the van shortly! 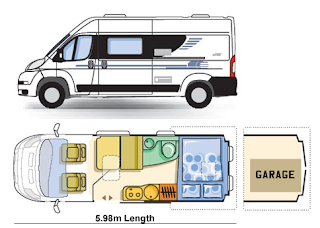 
Cost
We covered the full breakdown of costs here:
Touring Europe For A Year - What did it Cost?