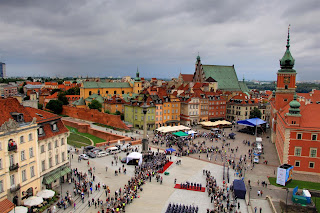 After navigating a confusing bus and tram route from the campsite and into the old town we were a little worried. The whole place was swarming with Police and Army officials. Was something going on that we didn't know about? As it transpired, there was some sort of Police ceremony where officers were being given awards and there was a generally "let the public climb all over our kit" day.

Warsaw is our 8th capital on this trip and I'm afraid to say that for us it ranks fairly low on the list. The old town is nice but there is something a little faux about it which I think may be due in part to a lot of the old town having being reconstructed following World War II. We spent several hours walking around, hoping it would grow on us but it just felt a little cold despite the flower beds. Our usual tact of "getting lost" in a place didn't really happen as we were soon out of the touristy areas and into the modern metropolis that has sprung up around it.