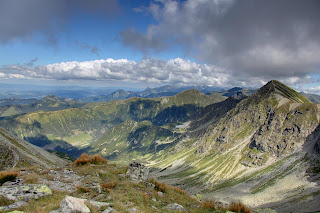 Oops! Over a week without a blog update, we're sorry! We've been out in the sticks and spending a lot of time walking and hiking in the mountains here in Slovakia and as such Wifi has been hard to obtain (or we've been knackered when evening has come round!).

The Western Tatra's were just as impressive and the fact that so many excellently marked trails and maps exist make them incredibly accessible to walkers and hikers and we've tried to do just that. Climbing over 1200m in height and with some sections a scramble over rock faces and ledges where chains had been fixed to help you navigate we took about 10 hours to complete a 9 mile route. Sophie did really well, having never done anything like that previously and I think secretly she really liked it - aside from the blisters on her feet!

We spent two nights parked opposite a 'Pension' or hotel / chalet (GPS: 49.24270, 19.71391) which no doubt comes alive as do the mountains in winter. Beer was €1 a pint and had we not had a fridge full of fresh food to eat we certainly would have sampled some of the menu, with nothing over €5 to choose from.


Before traveling to Bratislava we stopped off at Bojnice & Trencin both of which had a castle complex. Although Bojnice was nice enough and the fairytale castle was impressive, it did turn out to be a bit of a tourist trap with lots of tat on sale in and around the castle. We did however stay for free in a grassy carpark opposite (GPS: 48.89425, 18.03845) 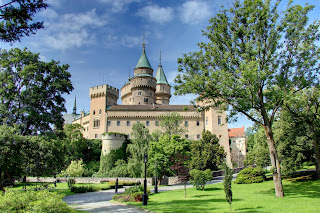 Trencin has a medieval fortified castle which is situated high on a rock above the city which dates back to the 11th century. The town square was pretty and as we sat with a beer in hand we admired the view of the castle above. We also got a great view of the surrounding area from the top which cost us about £6.