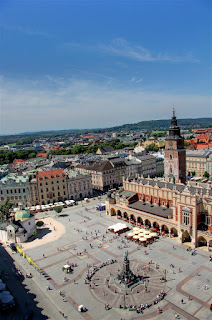 Having stayed a second night at Auschwitz we headed into Krakow, not wanting to do the usual extortionate campsite on the outskirts and mess about with public transport on the way in we had researched ‘Secure Parking’ and found a little car park about 15 minutes walk away (GPS: 50.07215, 19.93570). Cost was £10 but given the campsite was £20 + transport it didn’t feel so bad. It was worth e-mailing beforehand as some other campers were turned away.

Krakow immediately felt much more pleasant than Warsaw and there was more of the old town to see on foot. Although reconstruction has of course taken place since WWII it somehow feels more authentic here, much of the old town and castle has a great feel to it. It was a baking day and several litres of water were consumed as we walked round.

Aside from the obligatory spiral staircase to get to the top of St Mary’s Basilica we didn’t pay to visit any attractions, it was such a nice day we decided Krakow was best viewed from the outside.

The bars which lined the square beckoned and on the evening we enjoyed a few beers as the buildings became illuminated.

Another early start saw us heading to Wieliczka Salt Mine. Again – worth getting here early, the mines open at 8:30am in peak season and certainly by the time we exited I wouldn't have wanted to be just arriving. At £30 for both of us we did have to think twice before we parted with our money but trusting in our Lonely Planet we did so and descended the 380 steps to the base of the mine.

Although slightly overshadowed by a group of gobby Essex tourists the tour was great and the mines much cleaner than some of the helmet shod water soaked underground mines we have visited in the past. The lift back to the surface however consisted of us and 6 French tourists doing sardine impressions in a tiny metal lift for 30 seconds – Sophie was not impressed!