A+ A-
Print Email
UPDATE 6th September: Scroll Down for HD Videos!! 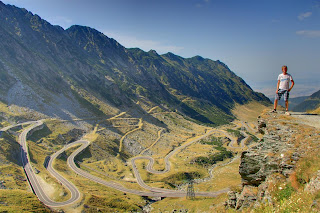 A visit to Romania wouldn't be complete without a trip on the Transfagarasan pass, famed by Top Gear as the best driving road in the world we decided that we'd have to have a go for ourselves.

Probably not the best idea then, with hindsight, to do a big shop and fill our 90L water tank before attempting the assent. Had it not been for our remap I'm not entirely sure we would have made it up at all but as it turned out we gave a few Dacia's a run for their money that's for sure! We've made a video of the best bit - about 6min long and in HD but until we find some decent wifi that'll have to wait I'm afraid!

The road itself is in great condition, compared to some of the roads and passes we've driven on, aside from the barriers which are absent in many crucial places. The Romanian's had taken it upon themselves to setup tents in some various risky looking places, should anyone end up coming off I dread to think of the consequences.

Once you arrive at the top you are greeted by... chaos. Tat sellers and a choice of either pay for parking or do as the locals and abandon it on the road and wander off to look at sheep skins and bread! There was however a large glacial lake called Balea at the top of the pass with a zip wire which ran from one side of the mountain to the other (only for the brave ones!) We pondered over Wild Camping here and probably could have done but we decided to press on and put some further distance in to try and find somewhere to stay for a few days. 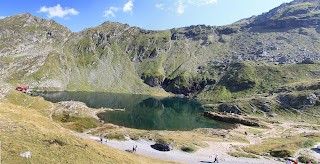 After Transfagarasan the next major landmark is Vidraru Dam also of Top Gear fame. However what Top Gear didn't show you is the road connecting the two which is without a doubt the worst road we have ever driven on, with cars abandoned with flat tyres and sump damage everywhere - except for Dacia's that is! We made a video of this road also and will update once uploaded.

I would sincerely recommend that, unless this road improves you don't take a motorhome of any value down it or if you do take it very, very steady unlike like the convoy of 4 Spanish vans we saw. If you see a motorhome body on the back of a horse and cart with Spanish plates on it I can tell you where it came from!            The dam itself is impressive although the power ranger statue (Prometheus, a greek titan) was a little odd, but we were getting pretty tied by this point. Just around the corner is a large camping area where we pitched up and were joined by the Spanish vans. 'Tourist Tax' of 5LEI (£1) was paid willingly and we stayed there for two days to recover!

However, after the Pass the roads deteriorate quite significantly!


Cetatea Poenari GPS: (45.34383, 24.63515) - On the way down the pass (south side) there is a small designated camping area next to the river which is £1 per night which goes towards keeping the area clean ie: free rubbish bags etc.
Posted by Europe By Camper
Labels: Romania