Oslo in a Motorhome

A+ A-
Print Email
Our relationship with Oslo got off to a rocky start as the car park we had initially chosen between the Natural History museum and Munch Museum gave us an impromptu view of a different side of the city. In the evening and the following morning the car park had been taken over by about 25 VW T4 of various registrations housing immigrants and the park was taken over by gang masters giving their orders for the day. This probably heightened our awareness of the number of beggars and "looky looky" men and women selling squeakers, playing accordions and sporting limps and sticks which was a big detractor and something not witnessed in either Copenhagen or Stockholm.

We moved first thing in the morning to another car park at the Sculpture Park which not only was an excellent location, and free from any unsettling activity, but provided a great walk into the city down one of the main shopping strips. The carpark itself would be suitable for 6m vans or if you have an overhang you can throw it off the back in a couple of spots around the edge. No signs indicating no campers / overnight and charges are 16kr/hour 9-5 Mon-Fri, 9-3 Sat and free Sunday. GPS: N59.92862, E10.70363. There was in fact lots of 'Wild Camping' possibilities near the Castle and ferry terminals but this one suited us fine for the quietness and great access to the sculpture park to explore after a day in the city. Much of the city centre parking is time limited to 2 hours during daytime hours but a little further afield it is unlimited. Link to all municipal car parks in Oslo HERE with ours Highlighted (15min walk to centre).

Oslo itself ranks below Copenhagen so far on the three Scandinavian capital's we've visited. You would probably rank it #1 if you like Museum's and if you do this is one of the rare occasions where an 'Oslo Card' would be worthwhile, since there is at least 50. We did all of the main sights from the outside in just under a day and were again blessed with 20+ heat and last night we had our first rainstorm of the trip - not bad for 5 weeks in Scandinavia!

The sculpture park was excellent and we're not into sculptures, the fact that all the works were competed by one artists gives a compelling sense of unity and everything flows together - defiantly one not to miss. The american influence continues with queues at every TGI Friday's yet many local eateries remained empty.

A quick look at some of the restaurant prices confirmed we'll not be eating out and a supermarket we went into wanted £3.50 for a 33cl bottle of Carlsberg so we'll not be drinking either! If and when we need essentials we'll be looking for a 'Rema 1000' tipped to be the cheapest option here, since Netto is positioned much more mainstream like Tesco or Sainsburys.

Overall? Spend a day in Oslo, maybe two if you like Museums


Currently parked overlooking the city on Bygdøy watching some impressive clouds, our next move will be up to the Holmenkollen Ski Jump for a view looking down on the city. The weather looks to brighten up - so we'll leave you with some shots of the moody skies! 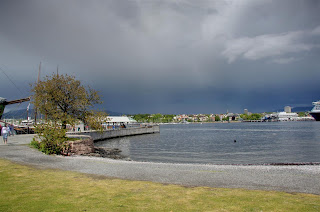 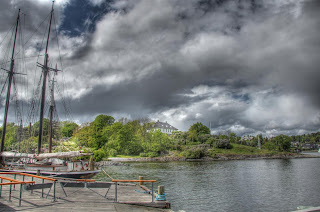 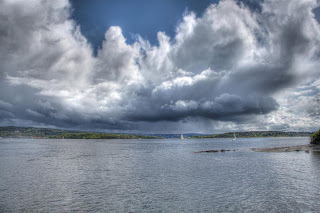