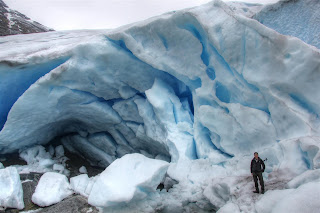 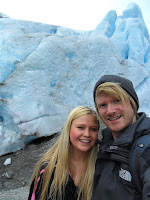 Now we are reaching the midpoint in Norway, the scenery has become even more breathtaking. We willingly payed the 30NOK honesty box toll to get to the car park at the bottom of the  Breheimsenteret Glacier at Jostedal. While it was just a stones throw away from the car park, to access the Glacier required clambering over a good few rocks and I don't mind admitting I was on my arse a few times! As we approached the colours changed from a muddy white to a deep blue colour as you can see from the pictures.


Why is the ice blue? Wikipedia states "Ice is blue for the same reason water is blue: it is a result of an overtone of an oxygen-hydrogen (O-H) bond stretch in water which absorbs light at the red end of the visible spectrum.".

We approached Route 55 from Luster to Lom which is one of the main tourist routes. We found that evening when we were talking to a lovely German couple that the route had only just been opened that afternoon at 2pm having been closed for the winter season. Seems we are pretty early for Norway, but as the German couple we spoke to were on their 15th trip to Norway told us now is the best time as it gets very busy in summer and the mosquito's away from the coastal regions are vicious.

No more english campers today, but plenty of UK registered classic cars on a rally. Looking at the prices, the cost of the "run" for one person is a grand more then we've spent in 51 days away! (more info here):