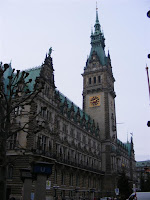 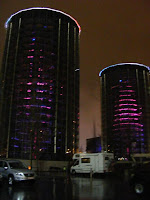 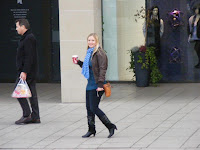 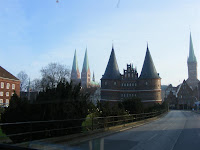 After Berlin we were ahead of schedule so we travelled upto the Baltic Sea, we had a lazy day around the coast and stayed on a campsite for two nights.

We didn't spend a lot of time in Lubeck we just whipped round the main attractions, Lubeck is kind of marooned in the middle of an island with one bridge which takes you over to it. We travelled to Hamburg and arrived there for lunch time.

We have seen many Christmas markets but none of them had been in full swing. The atmosphere was great and many people had turned out for the first day of the market. We saw a few attractions but bypassed the huge shopping centre as we had run out of time on the parking meter.

We also drove to the southern park of the city to see a U-434 Submarine which was one of the biggest non-nuclear soviet submarines. As Adam was looking forward to the VW Museum in Wolfsburg we pressed on to an aire which we had found that was on the VW premises.
Posted by Europe By Camper
Labels: Germany, Hamburg, Lubeck