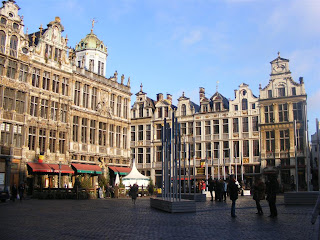 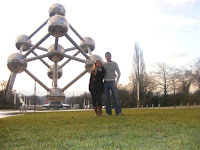 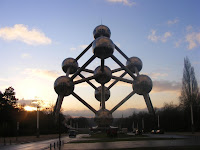 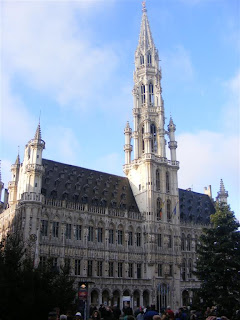 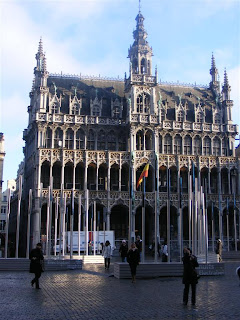 We stayed the night at a free aire just outside Brussels in Grimbergen where behind us there was a great little bakery which was open at 8:30 when we left for Brussles - fresh Pan Aux Choc's for our breakfast and bread rolls for our lunch! We made our way to the Atomium as the sun was rising - see the above pictures. We then headed for the city centre - we had decided to try and get parked as close to the centre as possible as there were no camp sites or aires near to train or bus stations to use public transport. As luck would have it on our first lap round we pulled
into an on street space just 5 minutes walk from the Grand Palace - the main attraction! We were treated to blue skies for the first hour until it clouded over and grew cold.

We spent 3 hours walking round the sights - although unfortunately some  of them were a little further afield so we had to miss out the EU Parliament building and one or two others. We also happened upon a slightly more seedy area behind the train station while cutting through - I thought we was walking past an underwear shop when suddenly the manikin moved - it was hookers in a great big window - it was like being back in Amsterdam!

On the way out of Brussels en route to Luxembourg we filled up with LPG  (35c/L) and Diesel (82c/L), at the same service station we found something we haven't been able to find since England..... Bacon! Three rashers for 2euro! Brussels is pretty expensive for everything except fuel it seems - we've not done a food shop since Germany, except for bread and milk.

We're currently at a camp site just over the border in Steinfort 11miles from the capital and will be the last campsite we'll be on until Paris - so we've made use of the hot showers and did what we hope to be our last load of washing.
Posted by Europe By Camper
Labels: Belgium, Brussels