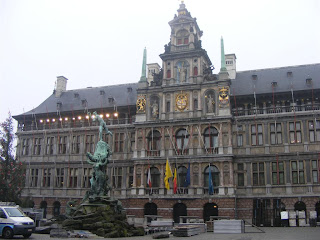 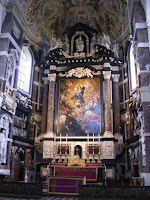 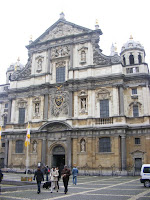 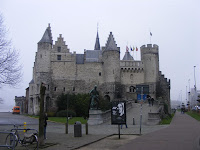 We arrived in Antwerp and were able to park right in the centre, as we
have been able to do in nearly all of the places we have visited so far.
There was a thick mist in the air and we wandered around the streets
looking at the sights. We found an English book shop in Amsterdam that
had a load of Eyewitness travel guides which we already had for most of
the places we knew we would be visiting - except for Belgium - they were
all reduced to 5 euro and it will come in very handy for Belgium I'm
sure. We wandered into a Gothic style Catholic church and was given a
tour by an enthusiastic (if it little scary at first!) guide who showed
us round. It is certainly nothing like any of the churches or
catherdials we had seen so far as it was mostly wood carvings in place
of stained glass and a large picture behind the alter which could be
changed by a pully system - to keep to congregation interested and
focused he said!

The guy said there was a lot of Roman influence from the guy (who's name
escapes me) who designed and built the church and this is visable in the
surrounding streets, which it was. This, however, might have had
something to do with all the Italian restaurant's close by - complete
with token Italians heckling you in!


As it was our first trip to Belgium we had to sample some chocolates, we
made our way to the smallest and most exclusive looking chocolate shops
and bought some truffles - one of which we're eating right now. Nice
isn't the word! We've split Antwerp and Ghent up into two posts as they were both so nice and wanted to share the pictures of both!
Posted by Europe By Camper
Labels: Antwerp, Belgium