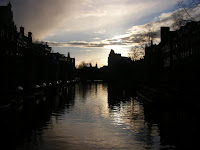 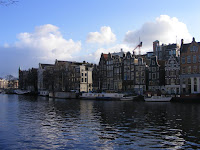 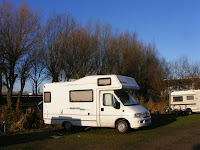 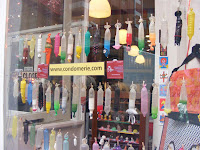 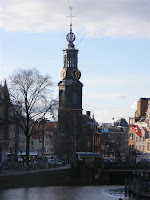 On our journey into the Netherlands we pulled in at the first fuel
station to fill up with LPG which by now had dropped to 50c/litre- only
to discover that the dutch have their own unique filling adapter which
we didn't know - so a quick U turn back to Germany to fill up
(fortunately only 3 miles to the nearest station as we were right on the
border) and we were raring to go.

We arrived in camping Zeeburg late on Friday after a few issues with
finding a suitable route into the campsite because of a low bridge. The
campsite was basic but for 15 euros and 5 minutes walk to a tram which
took you into the centre for 1.60 each we couldn't complain. First impressions of the city were that there appeared to be a large number of English, especially Geordies although this may have had something to do
with us deciding to have a bacon and egg McMuffin for our breakfast while they were having Big Mac's trying to recover from the night before!

There is definitely something for everyone in Amsterdam and we tried to take in as much of the city centre as possible. A large part of Amsterdam is geared toward tourists (noticeable from the number of 'tourist tat' shops - Amsterdam hat anyone?), be it shopping, exploring the relaxed culture of the coffee shops, the flower markets or the red light district. There were probably as many couples present as there was groups of lads. The shopping was great, although it was easy to have Deja-vu as a great number of branded shops repeated themselves on different streets.

However there is a lot of history to see and we were blessed with bright blue skies - a lot of the houses and
bridges over the cannals in the centre date back to as early as the 1600's and Amsterdam was not bombed heavily during WW2 so it made a refreshing change that everything wasn't rebuilt and suspiciously new
looking as was the case with Germany.

Tomorrow we shall return and view Amsterdam from the waterways as by the time we had explored the city centre on foot it was dark!
Posted by Europe By Camper
Labels: Amsterdam, Netherlands