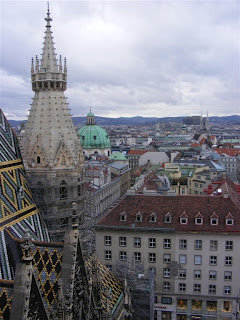 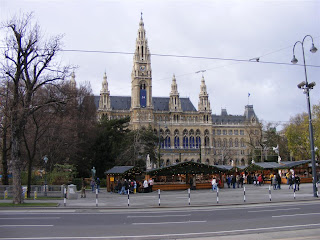 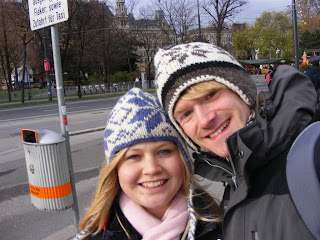 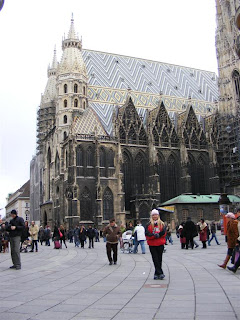 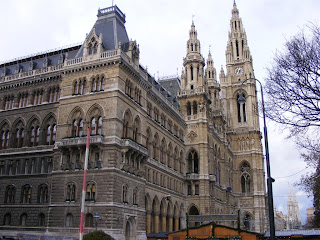 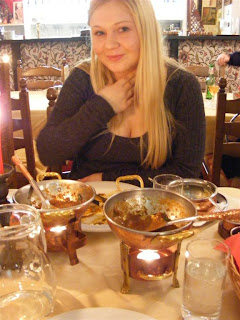 The morning was very cold, it had snowed in the night but we had kept
the electric heater on overnight which took the chill off.
The city centre was just 30 minutes away by a short bus ride and then an
underground station ride into the centre. With neither of us being a
lover of big cities, we didn't know what to expect - but we were
pleasantly surprised. Although it was very cold (to the point that we
bought a pair of very silly, but very warm hats with ear flaps from a
Christmas market!) the sights were spectacular and we went up to the top
of St Stephens and wandered around many of the other sites. We took in a
flask of tea which made a well earned break as well as a Austrian hot
dog - which was about 80% sausage! As we were in quite early we left
around 4 and went back to the site as we were going to move on to the
next place, however it started to snow and we decided rather then leave
we would venture back into the city for tea. What's more appropriate
then a nice big Indian when visiting Vienna!? The curry certainly helped
clear out the old ENT!
Tomorrow we head to Linz, with maybe only 1or 2 days left in Austria
before we head for Czech, we'll certainly be coming back here to visit
some of the high bits that were closed off due to the snow.
Posted by Europe By Camper
Labels: Austria, Vienna