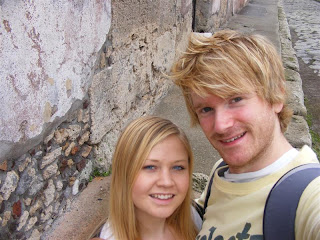 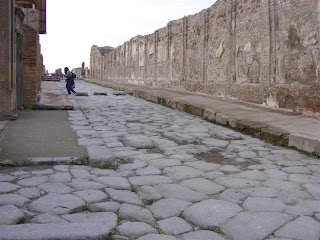 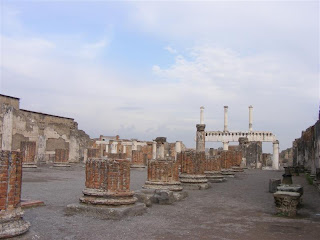 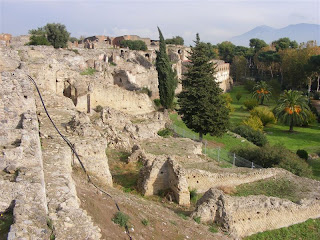 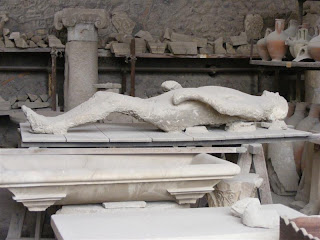 We arrived in Pompei around 3pm after having a lay in from our free
stop. I had read that driving around Pompei was like 'playing on a
playstation game' - it really has to be seen to be believed. Nobody
obeys street signs or road markings, or even traffic lights and everyone
uses their horn as much as their accelerator pedal! After that ordeal
was over and done with we parked up at 'Camping Spartacus' - a
refreshing 14euro a night and parked directly opposite the entrance of
the ruins. We did however run out of gas and had to travel up the road
for a refill which was 8euro, not too bad, but we will certainly be
getting straight on the toll roads to get out of here!
We were joined on the site by a friendly Kiwi couple in a UK camper van
and spent the evening drinking wine and swapping places to visit and to
stay.
Today we went into the ruins, the scale of them is impressive and we
walked around the streets for several hours. I'd imagine that you could
spend a whole day if you were really into your history, but we took in
as much as we could in three hours and came back to start planning the
rest of our trip and do some chores around the camper.
We have decided that we are not going to go any further down to Sicily
since there is nothing any further south of here that we want to see,
and a Ferry from Naples is nearly £300, so we will be heading over to
the east coast of Italy before traveling up through some of Eastern
Europe, we shall plan this leg in more detail over the next few days.
Enjoy the photos! :-)
Posted by Europe By Camper
Labels: Italy, Pompei