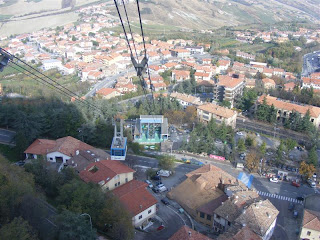 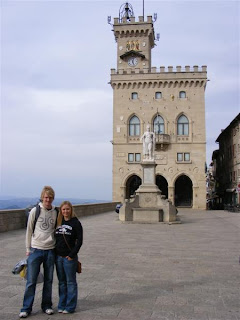 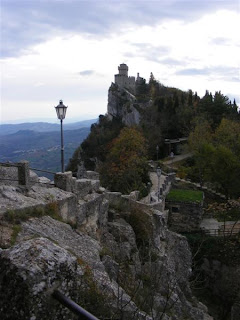 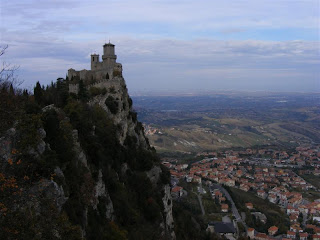 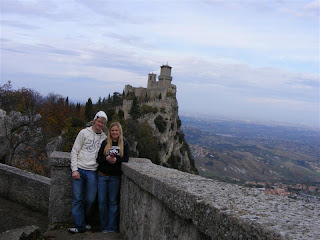 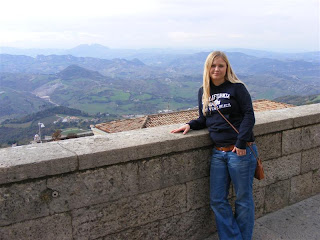 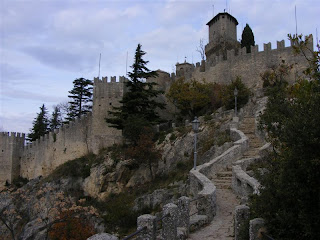 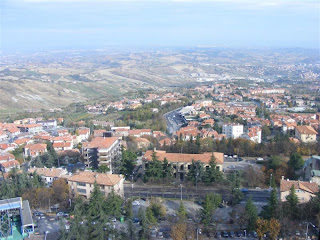 So, we decided to leave the camper at the bottom of San Marino and take
the cable-car up the side of the mountain to the towers which we had
been looking forward to for days. I was slightly scared of the cable-car
as you will see from the photos it was a sheer drop!!
In the end this was a good call as it cost under 10 Euroes for both of
us and it took us straight to the attractions. The ride wasn't so bad
and the panoramic view was spectacular. At the top we found little
streets with lots of shops, these ones didn;t sell tat though .... the
first shop we came to said TAX FREE .... and then every other shop we
went into said the same thing in the window, and indeed it was, all tax
free. We made our way up the cobbled streets to the 3 towers where the
view was even better.
We are so glad we visited San Marino, we could imagine in Summer it
would be a big tourist trap but as there were no tourists except us it
was great an the weather was not too bad either - still around 17C. I
just chose a few photos but today was great.
We have headed up the toll road and we are near to Milan now at a
trucker stop/aire with CCTV cameras and a guard. We are going into the
south of Switzerland )Fingers crossed we won;t get searched again!) so
another day or so and we will be out of Italy and also out of the warm
climate! I've got my polo neck jumpers and Ugg boots ready!
Ciao!
Posted by Europe By Camper
Labels: Italy, San Marino