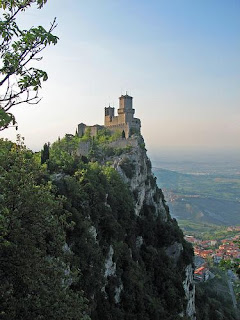 Just a quick update to say that we have gone from having no internet to
internet fast enough for us to catch most of the first episode of Top
Gear on BBC iPlayer!

We didn't drive too far today, just up the road to The Republic of San
Marino. We got here about 3:30 and decided to go to a camp site as we
have spent the last few days free camping and we had a stack of washing
to do (the laundry at Pompei wasn't up to much). We have the place to
ourselves and have done two loads of washing and cleaned the camper
inside.... I'm not too sure where to start on the outside its so bug
encrusted - so I just cleaned the lights (!). Diesel is cheaper here
than in Italy @ 1.14EURO so we'll be filling up before we leave.

Tomorrow we're going to get up early and go to the tower which we just
drove passed today and see what is to see of Rimini before heading
North. We have decided on a route through Europe - missing out Spain,
opting to see some other countries instead. This way Spain could be
revisited in the future which could take in the West side of France we
missed out also. Although it will be cold, the skies will be clear and
we've packed enough jumpers and coats it would be a shame not to use
them! We will be heading into Switzerland and then onto Austria (maybe
Hungry), Czech, Poland, Germany, Netherlands and Belgium before heading
home.
Posted by Europe By Camper
Labels: Italy, San Marino