We’ve been to St Petersburg!

If you know us personally then you’ll know that we’ve been talking about going to Russia for some time. It was originally our intention to take in Moscow and St Petersburg on this trip by road but after some initial difficulties on obtaining fully comprehensive insurance for our van wrote that idea off. When we did find a willing Dutch insurer we were already on the road and hadn’t done any of the necessary research that such a journey would require so decided to save it for another time.

Looking at the map it was frustrating seeing just how close St Petersburg was and the number of Russian registered vehicles on the roads here in Finland made it even more frustrating, so we began re-investigating Visa’s, ferrys and trains only to discover that it is actually possible to visit St Petersburg for up to 72hours without requiring one.... So what the hell, we booked it! Due to other constraints we only booked the one night, it is possible to have two and if you get the opportunity to do so I recommend that you take it – there is just so much to take in!

It was exactly the mix of spectacular buildings, insane traffic, prices both end of the spectrum that we had envisaged – we loved every minute of it!

Apologies for the unusual level of detail here, I try to keep our blog posts punchy but there was just so much to take in.

There are two parts to this article, this post focuses on our time in St Petersburg and the other focuses on the practical information if you wanted to replicate something similar yourselves. To see the latter, click here.

Having left the van in a secure parking garage we boarded the boat in Helsinki at 6pm. I’m unsure at this point whether to call it a ferry or a cruise ship as to us it was just a reasonably priced method of transport – it could be either depending on your inclination and budget. We had a comfortable en-suite twin cabin with a great shower and one of those marine toilets that threaten to eat you alive if you haven’t already run 20 paces after you’ve flushed it. We had eaten beforehand in anticipating the prices onboard and rounded off our evening with some duty free wine and beer.

The next morning we opted for a breakfast buffet onboard to set us up for the day at 7am (now GMT+3!), I don’t know what anyone else thinks’ when they see a continental breakfast but I see ham and cheese sandwiches slipped into the backpack for lunch! Before we knew it we had docked in the brand new Marine Facade located just outside the city centre to make St Petersburg more accessible to larger cruise ships then the crowded Neva that runs through the city.

Once outside the comfort of the guarded port we were greeted with a mixture of soviet tile-clad tower blocks in various states of disrepair rubbing shoulders with recently constructed trendy apartments made out of glass and bricks. This contrast mirrored the cars on the road - Lada’s, communist trucks and vehicles in various states of disrepair being overtaken at breakneck speed by brand new BMW X5’s with black tinted windscreens! More on cars, roads and driving a bit later.

The shuttle bus dropped us off at St Isaac’s Cathedral and this was a perfect opportunity to climb to the top (£3.40 each) and get our bearings as to where the major sights are located. However, we had to learn how to cross the road first and we were of no help to the American tourists who asked us if new knew how to “hail a cab”! For a brief time it was like being dropped on Mars until we worked out that you sort of cross the road and as if by magic the traffic parts or goes around you and those that have lights count down the seconds before they change. From the top of St Isaac’s we worked out or plan of action and took a few of the obligatory city backdrop photo’s. 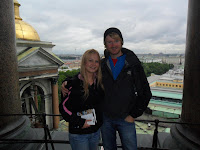 The next stop was the Church of Spilled Blood which has those magnificent ice cream coned spires which is the first thing that pops into your head when you think about Moscow. The inside (£5 each) was just as lavishly decorated in gilded gold leaf.

At this point we were still trying to take it all in, the guide book had failed to prepare us for the scale of the place and the pictures by no means did it justice. We walked over to Peter and Paul’s Fortress stopping to get one of the Smoked Salmon Crepes we’d read about in the book  (£1.50 each) and looking on in awe at the show of force by the Russian Artilary Museum – “and this is the stuff we don’t use anymore!”. We were looking at the Jewish Synagogue with a mixture of beautiful blue tiles and dull grey concrete when at which point the heaven’s opened and we hid in a doorway until the worst of it passed.

We passed back over the Rostral Column’s and couldn’t believe the length of the queue’s we saw waiting to get inside the Winter Palace, easily 2-300 people so some tactical thinking needed to be employed in order to maximise the following day.

We made our way down Nevskiy Prospekt which is the main thoroughfare and shopping district en-route to the hotel, while there was the usual stalls selling ‘tourist tat’ – Russian dolls, soviet memorabilia and the likes some were selling gold and silver jewellery. Our one regret from our visit is that we did not get much time to get into the shops and markets which could easily take two or more days on their own, instead we tried to stick to the main tourist areas.

We chose ‘Sky Hotel’ which is one of the cheapest in St Petersburg, you enter it via a sort of back alley and as you walk up the stairs you can see into the adjacent buildings where people appeared to be living despite squalid rooms and broken windows. The hotel, on the sixth floor, is very clean and modern and prices start at €50 for a double room with shared facilities which are what we opted for since it was for one night and we had our own en-suite on the boat.

We dried our jeans from the shower and set off to find somewhere to have our tea, we spent some time looking down the side streets of Nevsky. We settled on one Restaurant with a large outside terrace, since smoking is rife in every restaurant (because cigarettes are 34p a packet, yes 34p!). However once we got the menu’s it was clear the prices were 40% more than the one outside – so we left! I’m sorry to say at this point we ended up in an Indian we had seen online called Tandoor. The service was typical Russian – terrible! - but the food was good and the beer was one of my favourite German wheat beers so all was forgiven. It was still light and warm when we left 11pm as we made our way back to the hotel, calling in at 24 hour cake shop for two delicious slices of cake and two bottles of water (£3).

We got up at 7am which is 6am Helsinki time, could have been any time you like by that point as we’ve been through 3 time zones in as many weeks. Breakfast is included in our room rate but it’s down the road in a sister hotel which is no big deal so we checked out and had some breakfast.

Our tactical plane was to get to the Hermitage for 9am (£8 each) so we could be first in the queue, which we virtually were. I may have read somewhere that the Hermitage is the largest art collection in the world, the scale of the place once inside is breath taking. We deliberately didn’t take our camera inside since we took the opportunity to leave our bags in the cloakroom and I’d had my camera glued to my hand the previous day so it was good to have a break from it. I’ve got to admit we don’t know a lot about art so show me a painting and tell me it’s a Rembrandt and I’ll believe you. My advice is plan your trip here – research what is on show, get there early and plan your route. You WILL got lost (we did, several times) and spent nearly 3 hours walking around it trying to take it all in. 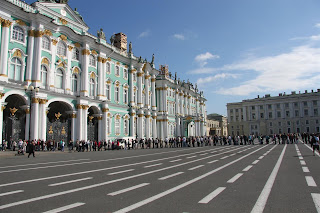 Once outside we attempted to fill in some of the gaps from the day before, St Nicholas Cathedral and then up past the station. This is where, for me (Adam), St Petersburg really came alive. Old Ladies selling simple items at the side of the road, we walked passed one woman holding out a pair of adidas trainers in the hope that a passerby would offer her something for them. Kiosk stalls selling Beer and Cigarettes and Vodka for pence and all sorts of food stands with the western favourites represented at about a quarter of what we’re used to paying for. 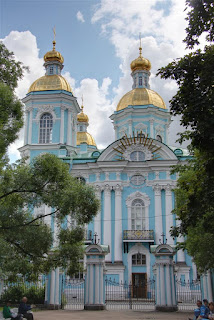 Of the few shops we went in the cosmetics items that Sophie looked at were about the same price and we had hoped to find some bits and pieces to bring back but we didn’t really want or need anything. We arrived back at the bus stop for 4:30pm and was back onboard with an exit stamp in our passport – the whole experience having ended as quickly as it begun.

Summary
Amazing. Fantiastic. Wish we’d stayed longer – but we will be back one day to visit and Moscow has just jumped up several places on the ‘to do’ list.

Cars / Roads
St Petersburg is a MAD place when it comes to cars and driving, we saw 3 accidents while we were there and there were many other cars with evidence of recent collisions. The traffic is a mixture of new BMW’s and old Lada’s and other Russian cars I didn’t recognise with the traffic lights being controlled by police in tinted booths at the side of intersections. The police in their Lada’s chatted and shared cigarettes while the chaos went on around them – with speeds on the Nevskiy Prospekt easily topping 70mph. We did spot a couple of guarded car parks that would be perfect for camping though!

Road Signs
We really need to learn our Cyrillic alphabet, these signs just look mad to me!

To read on how to book the same trip, click here:
http://www.europebycamper.com/2011/06/helsinki-to-st-petersburg-visa-free.html
Posted by Europe By Camper
Labels: Russia