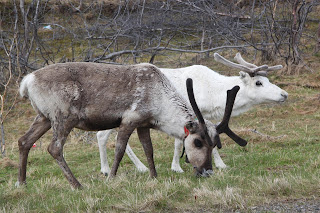 So if you read our older post made from the most northern point in mainland europe you'll know that we made it on the 600 mile drive from the Lofotens .

We saved a staggering £80 by being under 6m for the 6km under-sea tunnel (return) a fact that was debated by the toll booth operator until we whipped out the specifications which state our length as 5998cm. "Any bikes?" trying to catch us out on an overhand. None. An additional fee for the passenger also brought our total to £44 return. The tunnel is supposed to be self funded by 2012 but I expect a toll of some sort to remain given the number of 6m+ motorhomes that seem willing to pay it.

The 'Nordkapp' Tourist Trap is situated at the end of the road as you would expect and is guarded by Securatis. I don't use this phrase lightly since we had only turned round and stopped for seconds when the 'guard' rushed to move us on. £52 for two people to enter! No thanks.

All of the laybys enroute have been removed - it was once possible to park and walk to the far right of the toll booths and sneak in but I wouldn't fancy my chances today. Besides, what's there?
Knivskjelodden carpark is deliberately small - you might squeeze 10 vans in, maybe more. There were easily 50 motorhomes at Nordkapp. Not us, we were the outsiders.

The young Italian couple next to us told us they did the walk yesterday in brilliant sunshine. 3hrs there, 4 back. We had tea and set off at 6.30pm and arrived just after 9. The terrain was mixed rocky, boggy and diversions to avoid snow and rivers but the trail was very well marked.

We took a bottle of Champagne which was rolling around in our van, it made a nice touch and as we sat looking over at the 'fake' most northern point as the Sun came out as if it was midday.

We were the 49th person to sign the 2011 book so seems as with everything else we're quite early in the season. We arrived back at half past midnight - enjoying the midnight sun en-route.

When we awoke the next morning it was so foggy you couldn't see your hand in front of your face and we descended at 30mph back to the toll, so glad that we had done the walk that evening.

Was it worth it? I think so. While there isn't much en-route (avoid Tromso, not worth the de-tour) the scenery was stunning and the rock carvings at Alta break up the journey somewhat. But avoid the tourist trap, visit the 'real' North Cape instead.

Just to prove we did it - scroll down to see our GPS tracks from the walk!

Sent from my BlackBerry® wireless device 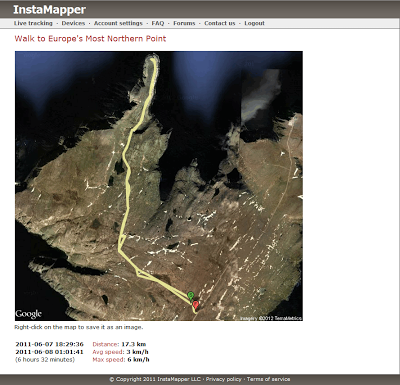