Norway in a Motorhome - On a Budget

A+ A-
Print Email
I've had a lot of people ask us about Norway and if it is as expensive as everyone says it is, the answer is on the face of it yes it can be but it is possible to do Norway on a budget.

You will probably fall into one of two categories:

1.) You are on holiday; you're not going to let the expenses of things get in the way of enjoying this beautiful country. In which case stop reading now!

2.) You're a tight wad (probably from Yorkshire like us...) and count your pennies. Paying double or even triple the amount you're used to for a liter of milk is really going to annoy you and you want to save money where you can.

There are two variables which will make a big impact on your cost of touring Norway:
Only interesting point for both ferries and roads - trailers and caravans incur no extra cost!

Toll roads exist in Norway either to fund the building of the particular link or to reduce congestion in cities. Contrary to popular belief you don't have to register your credit card in order to pass through the many ANPR (Auto Number Plate Recognition) tolls in Norway. The wording on most of the tourist information is ambiguous since they would of course much rather you signed up to their system rather then them having to send you an invoice in the post.

The website is worded differently to the leaflets - the item in bold is omitted
.
If you dont have AutoPASS or a Visitors Payment contract an invoice will be sent by mail to the owner of the car, at no extra charge. This also applies for foreign vehicles. This invoice is sent from Euro Parking Collection (EPC) plc in London, United Kingdom. It can take up to six months before this invoice is sent.

There is also some ambiguity around any 'discount' which may or may not arise from an AutoPass agreement. From my conversations the discount only applies if you have an AutoPass OBU (On Board Unit) and not using the number plate recognition system as per the tourist agreement. The tag has a deposit of NOK 200 which is returned when you leave or you can post back the tag to the operator. This discount applied for using a tag is 13% - you'll have to decide yourself if it is worth it.

There are two types of tolls in Norway, 'Toll Ring' which is a bit like London's congestion charge which are present for Oslo, Bergen and Trondhiem. These are cheaper at certain times of the day (typically after 5pm) so look out for these. There are also many toll roads which can be avoided simply by taking a short de-tour down the original road that was there prior to the upgrade being built but a great many of them are simply unavoidable.

There is always a chance, as I have heard from a few on the motorhome forums, that the bill never does arrive, I'll update this post when we receive ours or when 6 months has elapsed.

Update: It's almost six months since we visited Norway and we have received a bill for £7 which amounted to the ring toll for Oslo only.

The Kirsund / Atlantic Highway Rip Off 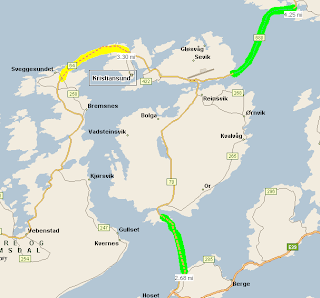 If you are over 6m this could save you £77. The Atlantic Road is talked about in all sorts of tourist information, we personally didn't rate it that highly but that is just our opinion. The Atlantic Road is a "Tourist Veg" or Tourist Road and thus carries no toll along it's length. However at it's end point there is the 'Atlantic Road Tunnel' which despite featuring in the tourist information is a tunnel like any other. There is a toll required to drive through it  in order to reach Kristiansund & Nordmore and if that wasn't bad enough not only is there nothing at Kristansund worth seeing but there is a further toll to leave the island via Tunnel or Ferry!

Unless you have a particular disposition to drive through a 6km under-sea tunnel then I would turn back and avoid the toll completely. If you do want to carry on (and trust me, there is nothing really worth the cost at Kristansund) then the costs are as follows:

When we visited (1st June 2011) there were no automatic measuring devices and I got the impression from the friendly guy in the toll both there they weren't too strict with camper vans. 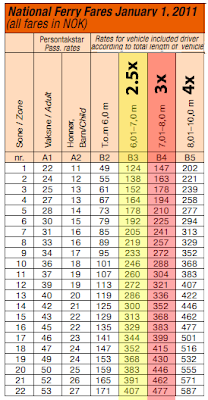 Ferries are a way of life in Norway; you roll up roll on and roll off often in a matter of minutes and they are absolutely essential for exploring the Fjords. So short are the journeys that save for a handful of routes there is little point getting out of your van, but don't make a cuppa because you have to turn your gas off.

The cost of ferries increase dramatically once you exceed 6.01m but its worth noting that there are no automatic measuring systems on any of the boats or ports we passed through.

Depending on the operator your tolls is taken when you are in the queue or when you have boarded. All ferries have a seated area although on the shorter routes this is only really intended for any foot passengers, while on longer routes such as Stavanger and Molde there are full catering facilities and free Wifi available.

The fare for the vehicle includes the driver and any additional passenger are paid for. While there are several operators such as Fjord1 and Tide the prices are similar and are zoned depending on the length of the journey. If you look closely at the map you can often find a route which can include a shorter ferry journey just around the next cove. We have been pretty careful with our route and we've been on 7 ferries.

As you can see from the table above on a longer route the difference for a 5.9m van and a 6.1m van can be as much as £236! I would say that if you are marginally over 6m then I would try for under 6m and get out of your vehicle and pay your toll from the passenger area. There is a fine of £45 if you fail to accurately represent your vehicle, but we've met many people who have been doing so for years. The choice is yours!

Norway is expensive for food and I agree with the sentiments of fellow traveler Lesley that the food here has unfortunately been monopolized by the supermarkets which seem to crowd every town where the independent produces that are so common in Denmark and southern Sweden seem to disappear. Once you travel through Norway, especially the Fjords, you begin to appreciate the length and cost delivery vehicles must incur getting to these places and why the food is so expensive and produce often not fresh.

The cheaper Supermarkets we found were Rema 1000 (the large ones make a small crusty bread loaf in store for 75p) and Kiwi Mini Pris. Without wanting to put you off - milk can be as much as £2 per liter, sliced bread in the absence of fresh up to £4, chicken about £16 per KG etc. There are exceptions to this though and prices vary between supermarkets and regions. 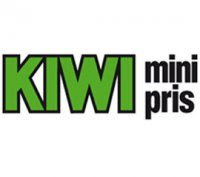 Everyone we spoke to from any nationality had brought plenty of food from their home countries in the form of tinned and frozen meats, stews, pasta, long life part baked bread. I would spend some time and plan your meals, write a shopping list and then stop off in Germany and do a big shop before entering Denmark if that is the route you are taking. There are strict restrictions (click) on Alcohol importing although most people we spoke to had ignored this and had boxes of wine stashed everywhere - the fines if you are caught are high and you could be stopped at any time.

It's not all bad though! Fishcakes (Fiskekaker) are about £3 for 10, Frankfurther style sausages are about £4 for 16. If you like Ryvita you're in luck and if you had any sense you'd have stocked up on meatballs from Sweden if you entered that way - 1KG for £2!

Take as much food as you can with you - pack as if you was going to the moon!


Fuel
It is essential that you arrive in Norway with a full tank of fuel since it is significantly more expensive than its neighboring countries and prices fluctuate daily and as wildly as Denmark or Sweden. Get a handle on what is a good price and practice filling up when you see that price rather then when you are empty / nearly empty. This could save you up to 15p/litre - currently fuel is between £1.37 and £1.52 a liter - with the higher figure being the most frequent one. LPG however is frequently available at 79p/liter.

Fuel is cheapest on a Sunday evening (9pm+). We were told this by a couple of people and didn't really believe it - but on a Sunday evening in a large town where there are multiple petrol stations the price drops and we've seen queue's forming just today. The price had dropped to 12.23kr from 13.40kr.

With the majority of roads being classified as 45 or 50MPH, there is no reason for not getting great MPG, oh - except for those bloody hills! We tended to coast down the other side (out of gear when it was safe to do so) to try and even things out a little. We're getting about 30MPG at the moment which we feel is very respectable in light of the terrain.


Avoid Campsites
In order to use the majority of campsites in Norway you must first purchase a Scandinavian Camping Card (link) for 120 NOK (about £14) - the Camping Card International is a different scheme and is not accepted in its place. The over night fees are in the region of £20 per night with very limited ACSI discounted sites.

Since 'Tømmestasjon' or 'Dump Stations' are frequent and very well sign posted there should be no need to visit a site in order to empty your waste or refill with water. Water is frequently available from fuel stations either in a heated cabin labelled 'Luft Vann' (Air / Water) or from a tap near the jet wash garages. We asked permission a few times but gave up when we told on many occasions thats what it's there for. We saw lots of Norwegian registered vans doing exactly the same.

Wild Camping is not only totally legal but actively encouraged with large laybys set back from the road, allocated parking places in most towns and while some do charge, alternatives can be found a short distance away - look for the local registered vans, they NEVER pay to overnight!


Make a Decision about Nordkapp
The costs associated with Nordkapp quickly mount up, even if you get as far north as the Lofotens then it is still a 600 mile journey to get there.

So lets tally up;

Alternatively, go to the 'real' Nordkapp, take a 6m van and knock £125 off the above.
See Our Post on Nordkapp Here

**UPDATE JULY 2012** The Nordkapp tunnel funds have now reached £120m and therefore the tunnel is now free! However costs to enter Nordkapp remain the same.