Menu
Home » Electrical » Essential Guide » Hairdryer from 12v in a Motorhome - The Solution!

Hairdryer from 12v in a Motorhome - The Solution!

A+ A-
Print Email
We're now nearly three months into our third trip and one of the recurring problems from the previous tours is the matter of drying hair. Sophie, who has lovely long blonde hair, hates not being able to blow dry it properly. We tried all manor of 12v hair dryers which varied from pathetic to down right dangerous with melting wires and popping fuses. In the end she settled to dry it using the hot air vents in the cab, which in Summer was a bit overpowering!

The solution was the setup I have described below, the cost for which was about £230. Relatively expensive however it is a small cost for the convenience of never having to go near a camp-site or pay for electric hookup if available at an aire and in that respect it has paid for itself already. Of course, when your done with it you can sell it on eBay - second hand units are making about £150+.

The solution involves the installation of 2100W Inverter. An inverter works by turning the 12v found in your  battery into 240v as found in your house. There are two types of inverter, pure sine and modified sine wave.

Pure sine wave is the better type which is exactly the same as the electricity you have at home. It is "cleaner" but ultimately pure sine units are very costly and are only required in applications where the interference that can sometimes be caused might be detrimental. Modified sine is perfectly usable for this application.

We purchased a Ring 2100w Inverter - this particular model suited us for a number of reasons:


Installation
My personal preference is to connect it to the cab battery rather then the habitation battery, the reason being is that it draws a great deal of power when in use and the leisure battery has now way of compensating for that. By connecting it to the cab battery you can run the engine bringing the alternator into play delivering 140Amps back into the system. You will find when the system is in use your rev's will increase to allow the alternator to compensate for the power draw and I personally would not consider running it without having the engine running - so aim to dry your hair before you set off if you are moving on.

An inverter running at 2000w and 90% efficiency will be drawing about 183 amps from the system which is going to rapidly discharge your leisure battery which in reality doesn't want to be discharged much further than 50% for longevity.

Furthermore the whole point of the installation is to reduce the dependence on electric hook up so draining your leisure batteries is going to be counter productive. The exceptions to this are of course if you have an impressive solar system and in my mind some decent battery monitoring equipment such as the NASA marina battery monitor.
I installed it as follows:

1.) First of all I removed the useless Fiat Jack from under the passenger seat, it is much better replaced with a trolly jack or similar in the back of the van. Don't forget to keep the towing eye out of it if you do though!

2.) You will need to prepare your cable for the installation. Open up the battery compartment under the cab floor and isolate it by removing the negative terminal. Lay out your cable so you know where it is going to be routed and where you will need to make the cut in the positive cable to allow for the isolation switch. Make the cuts and crimp the cables tightly ans shrink the exposed ends so they are neat. You will find the cables will run easily from the battery compartment into the break in the rubber floor either side of the seat, I ran the positive down the outside as this is where I was going to locate the switch, you might want to differently depending on your preference. I used heavy duty Velcro to mount the inverter in place as access for screws was difficult.

Be careful that there is no way for the positive cable to ground on the chassis of the seat or other exposed metal work.

There is sufficent room so you can close the front and still have a socket attached - useful for charging items when in motion.


3.) Drill a 20mm hole in the side of the seat base and fix the isolate switch through, this is also secured with a single screw to stop it being turned around. Be careful to give the seat's metalwork plenty of room so that a spark can't jump across.

4.) Reconnect the battery, turn on the engine and try it out! We found that Sophie's hair-dryer had a number of settings, with medium heat and full air the current draw was 1440W, on full power it was 1700W despite it being advertised as a 2000w hair dryer. 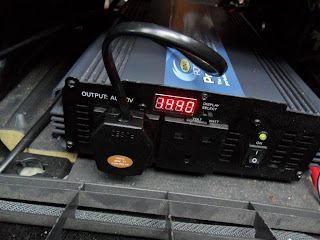