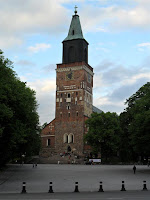 We spent two nights in Turku while the rain belted down and we made arrangements for another part of our trip, I'm not letting on what that is yet but once we've done it I'll post all about it! We spent a couple of hours in the dry walking around the town's cobbled streets mixed with modern buildings such as the town's library. Lots of wild camping opportunities here and many campers were taking advantage of them. Next blog post - Helsinki!

Conscious that Helsinki is now under 100 miles away and we don't need to be there until Friday/Saturday we sought out other places to spend some time and stumbled across a gem in Hanko. The town seem's to exist in it's own mini climate - it was pouring with rain all the way here and when we tried to leave we got 5 miles down the road it did the same. We turned around, came back and it's been dry and warm since! Weird. The town is a sort of seaside resort but being out of season it is relatively quiet and peaceful. There are some pleasant gardens which we walked seeing some of the fortifications from it's time as a Soviet Naval base. Tonight we sat out on the beach with some cheap tinnies from Lidl enjoying some sun with some rest bite from the presence of the vicious mosquito's we found inland. 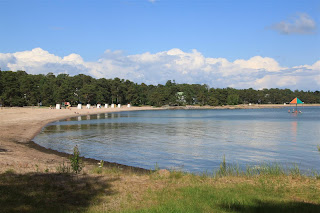