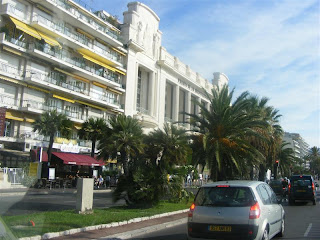 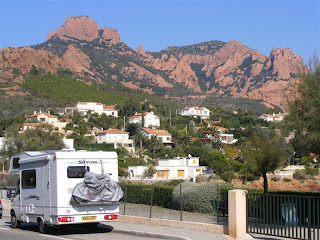 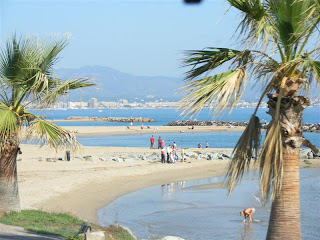 It was a shame to leave the the beach and St Tropez behind, but when the french guy on the golf buggy came round for his 7 euros we knew it was time to leave. It was lunchtime after all and we didn't leave the site until after 1pm, spending the morning enjoying the sun and then sweeping / hovering sand out of the camper. At least it's clean (on the inside!)

We headed up the coast to Nice, a drive of probably only 80 miles or so along coastal roads and by for our most relaxing drive of the trip. It took us through Cannes (film festivals) and then into Nice itself.

By the time we got to Nice it was starting to get dark and with no Aire's listed in any of our handbooks we tried our luck at a few camp sites but they was closed. Our tact of following an Italian Camper on the seafront failed when he made a second U turn in front of us (probably thinking why he was being followed by a british camper!) and we eventually found a small parking area allocated for motorhomes for free using some pushpins we had downloaded off the internet. No pictures of the Neon lights unfortunately, but it was bustling with lots of people out and about.We were tired and hit the sack early, and aside from being woken by a camper van joining us at about 1am (which was more of a relief as we were no longer alone!) and a bottle bank being emptied at 4am, we slept soundly.