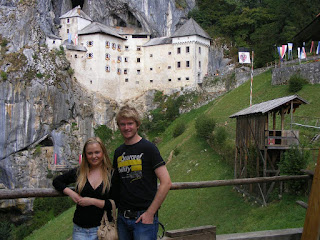 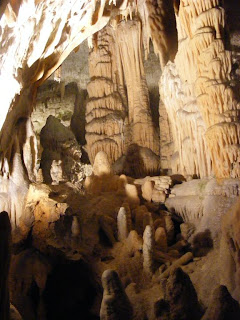 So today we took the train 2km into the mountain to explore the depths of Postojna caves. We parted with 35 euro, discounted thanks to me having an OLD student card in my wallet. The place was a bit of a tourist trap, the sort of place we usually avoid, but we felt it had to be done.

The caves were magnificent and far far upstaged what we had seen previously in Ingleton, once underground we were organized in groups by language – ours being made up largely with Chinese and Dutch (because nobody speaks Dutch really, do they?) No photos were allowed, but that didn’t stop the Chinese tourists so I thought, well if you can’t beat them… on the subject of which there was one Chinese lady who was off her rocker and was waving at all the different stones and walking around with her hands in the air.  This was all too much for the Dutch couple in front of us who had to keep stopping to compose themselves! 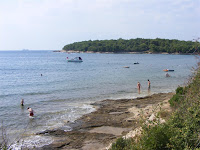 When we got out of the caves the weather took a turn. We drove a 5m twisty track to the top of the mountain to view the castle in the side of the rock, very impressive. We then wondered what to do next. We were disappointed that the 33c weather had not followed us from Budapest, so we decided to make a run for the sun and made an unscheduled cross over into Croatia! So here we sit in Camp Indije sat at the Bar with our free Wifi and a cold drink at 8pm at night and it’s probably about 22c still. It’s amazing what 90 miles south can do to the climate! Not sure where we will get to tomorrow yet, but that’s half the fun!
Posted by Europe By Camper
Labels: Croatia, Slovenia