A+ A-
Print Email
We knew from the meandering road on our Michelin map of Morocco that the drive toward Tafraoute from the coast was going to be a good one, this was our best so far. The route was lined with tiny Moroccan villages and mountain passes taking us up to 1900m above sea level. The scenery was just stunning and it was difficult to capture with a camera just how breathtaking and detailed the scenery is. More people use the road on foot or horseback then they do cars, with the women doing most of the heavy lifting while the men ride on  donkeys.

Left: A donkey with its legs tethered to stop it straying to far.
Right: Women seemed to be doing all of the heavy lifting, but could only be photographed from a distance.

Everyone, and I do mean everyone, waves and smiles as you pass and we've yet to work out if they wave to everyone or just foreign campervans. The children are equally friendly but even more cheeky, smiling and waving hoping that you will stop and offer them a sweet or a pen. Children in groups start to become a little more daring and you need to be careful that they don't attempt to play chicken with the van but on the whole they're well behaved and good natured. Some little boys spotted us miles ahead and made their way from their huts onto the roadside where they waited patiently at the roadside in the hope of a sweet, thanking us in 4 languages when we gave in and passed over a couple of wrapped sweets - after we'd picked the lemon ones for Sophie! Laterally we took to passing out the odd satsuma trying only to stop for those children who appeared genuinely needy, we're still not sure on the gift giving etiquette and there is a lot of debate for and against.

After a long drive we start to see campervans in the distance who appear to be free camping in the desert outside a campsite. Catherine approaches a Dutch couple who ask if this is allowed - "Black Camping!" they say, we ignore and find a spot anyway. We've not long stopped when we're approached by a friendly English speaking Moroccan who rides side saddle on his peddle and pop and enquirers as to the progress of Chris's beloved Bury match (Bury 3, Yeovil 2) which despite being in the middle of nowhere is happily streaming over our Moroccan dongle. We expect there to be a catch but leaves happy after pointing us in the direction of his shop in town. Later we're approached again and C&C get offers made on their bikes for the second time, it might have to go to sealed bids! The black camping is not so black after all, when an official looking guy with a receipt book comes and asks for 10dh (70p) each. Well, at least we're legal now.

Left: An Argon Nut growing in the wild  Centre: A fortified settlement
Right: A village built both sides of in face of a deep gorge

Another day, another 200km drive to our next destination, Taliouine, with the views just as breathtaking and spectacular as the day before. We're more than ready for a rest when we arrive at Camping Toubkal.

The weather is fantastic and we forget that we're still about 700m up and it doesn't take long before we've all had a bit too much sun and we spend a day just sitting around and admiring the fantastic view. Food is running low and there isn't a European style supermarket in sight so we have to shop like a Moroccan, trekking into town for supplies. There is one price for all fruit and veg and we fill a couple of bowls with produce but can't seem to buy anything that's over £1. The meat at the butchers doesn't look too appertising, it's all the same price and we're too late to get the best cuts - if only we can remember where they are.

Left: Fruit and veg, one price for all.     Right: Shoes for sale, if you can find a pair that is!

We settle for chicken, but can only find eggs. The eggs on the counter, it transpired, means that there are chickens in the back and what better way to keep them fresh without refrigeration then to keep them alive. It's not often you get to look your dinner in the eye but in a few seconds the deed was done and in less than a minute it was beheaded, plucked, gutted and in a carrier bag still warm for 40dh or £3. Delicious cooked in Catherine's remoska, Campervan Cookbook eat your heart out - we're starting to see the virtues of campsites and hookups and in Morocco we can do so for £5 a day and still come in on budget! 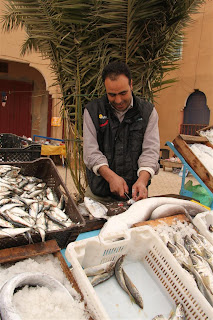 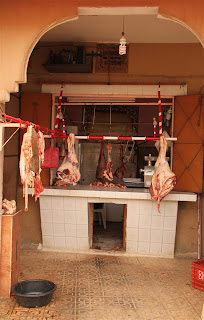 Left: We bought fish, 20p each gutted and de-scaled.   Right: A typical butchers, get there early for the best cuts!
Posted by Europe By Camper
Labels: Morocco