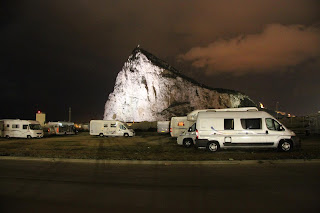 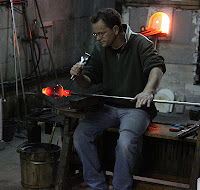 We made it to Gibraltar after a couple of days of coin tossing and chin scratching we decided that since we were passing, we might as well have a look. We arrived and  'wild camped' on the wasteland outside the border in La Linea with around 30 other motorhomers, mainly English registered and the majority of those an eclectic (or should that be clapped out) array of home built contraptions.

Upon entering Gib you are faced with two options - walk in, or hop on the only bus that charges you for the privilege of taking you into the center; the number 5. We opted for the latter since we had left it a bit late and with our stomachs rumbling the only thing that was going to satisfy them was a visit to Morrisons Cafe.

Being sort of teleported to a mini-england was at this point beginning to play havoc with our senses, the prices were in pounds (including the Diesel @ £1.05 a litre) but as we wandered into the town the timing felt a bit like we had arrived 20 years prior. Fish and Chips, Marks and Spencer and TopShop all at prices far in excess of those we remembered from home - but we haven't been home for 9 months so perhaps our price barometers are broken.

After fighting off the taxi drivers en-route to the cable car we took one look at the grey and uninviting summit and did an about turn and headed for the bus. It looked truely miserable and we didn't really feel like dangling above the clouds being harassed by monkeys. Overall we just didn't think the place had a nice feel to it so are hard pushed to recommend anything except perhaps an over-inflated Morrisons for a few home comforts - in our case Country Life butter and Twiglets.

The following morning we bid farewell to my folks who are continuing on round the coast through Portugal and set off to embark on our next adventure...
Posted by Europe By Camper
Labels: Gibraltar