A+ A-
Print Email
From our base at Le Relais outside Marakesh we stay for three days lapping up the sun, relaxing and enjoying the company of Catherine & Chris before contemplating a visit to the city. We eventually call for a Taxi from reception and wait in anticipation for what is going to come and collect us. There are two types of Taxi in Morocco; the usual 1980's era Mercedes and a 'Petite Taxi' the majority of which seem to be Peugeot 205's of a similar vintage.

The car that arrives is a Mercedes, with 950,000km on the clock and comically vague steering, Chris rides shotgun and we experience several arse clenching moments en-route to the center of Marrakesh. We disembark unscathed but disorientated and make our way towards the first notable landmark of Koutoubia Mosque. Being a mosque we can of course only view it from outside and so we press on with Chris leading purposefully to where he believes the main square is located.

When we stop to review the map we are approached by locals who speak to us in English rather than French and seem eager to help. They don't ask for money but the routes they suggest seem indirect and vague and we are wary of getting off course. We eventually make it to within a stones throw from the Bahia Palace when we were stopped by another friendly face. "The Palace is closed, do you want something to eat?". We decline and take a look anyway.

The Palace, it transpires, is not only open all day but only 74p to get in. Result. We hand over our money and are instantly transported into an oasis of calm, the bustling city streets inaudible from within the tranqual mosaic clad walls.

We emerge suitably relaxed and ready to tackle the city head on and make for a Souk next door where spices are sculptured into impressive cone shapes and we hover around like moths to a lamp. Within seconds the shop assistant has pounced and plied us with Berber tea which is refilled and reinvented with every sip. It becomes clear we are going to buy something and we make the most of it by photographing widely. Catherine and Chris are horrified to be referred to as our parents as we pose for a "family" photo and we haggle over our ground spices. No sooner has the money changed hands calm is restored and the shop assistant vanishes into thin air, a trick he has no doubt performed countless times previously. 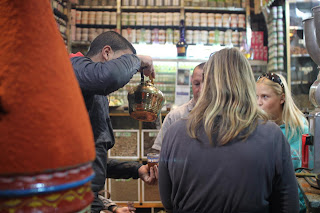 With the pressure to buy something now reduced we wander around the incredibly authentic Souk's and back alleys clutching our purchases in a prominent position. There is none of the cliche tourist tat here and if it is its incredibly well disguised, even the ever present French seem to be in lesser numbers. Meat is cooked over coals, cigarettes sold singularly from stools and every now and then we dive for cover from kamakazi motorbikes racing down the narrow streets.

Somehow we are discharged into the main square and make a bee-line for one of the balconies so the we can watch the snake charmers at a safe distance. We order Tajines, Brochettes and inexplicably, Pizza, all while trying to snap a few cheeky photographs of the spectacles down below. The main square was already beginning its evening transformation where stalls are setup to sell freshly prepared and cooked food in the open air.

Back on the ground again we head back into the Souk's where we get involved in the heckling and banter with the locals in vivid technicolor. We head for the Ben Youssef Medersa, an Islamic College, where we are promptly abducted by a guide who spoke no more than five words in five languages and by the end of the tour were left in no doubt that they pray five times a day for five minutes. 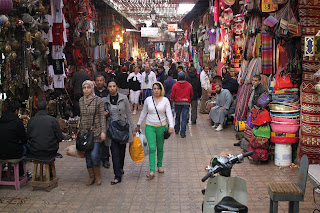 With the light starting to dim we headed back to the main square which was by now transformed into a bustling food market, nobody mistakes us for French as we are heckled with British colloquialisms enticing us to eat at their stall. The truth is not much other than the Maitre d' separates them and we settle for "Lubbly Jubbley" as our favorite at stall 117.

To fully appreciate just how lively the main square is on an evening this short 360 degree video should go some way to communicating the atmosphere of the place.

To summarise an incredibly long post -  we can't imagine a trip to Morocco that doesn't take in Marrakesh. Nearly all of the people we encountered were good natured and played their roles as token Moroccans with an almost theatrical flare. Certainly you need to have your wits about you to some degree and not allow yourself to be intimidated by a few who use questionable sales tactics. Take some money and buy something of low value just for the satisfaction of haggling, eat food from the market and enjoy the spectacle for when you return to your campsite you'll be left in awe of your experience. Enjoy!

You can read Catherine and Chris's account over on The World is Our Lobster.
Posted by Europe By Camper
Labels: Morocco