A+ A-
Print Email
Heading South and back toward the coast was the plan, driving down through the mountains we finally saw the vivid contrast of the sea against the sandy mainland as we made our way to Essaouira. We got to the campsite and slotted into the last two spaces much to the annoyance of two tag axel Burstner Elegance's complete with trailers who in the end had to park either side of the gate - what a spectacle.

Just before Agadir we found a wild camping spot right on the beach with guarded parking for £1.90 in the presence of 50+ other campers with stunning views over the ocean. A short walk along the beach took us into the small town of Taghazoute which seemed to be one of the main surfing hubs along the west coast, as the majority of the shops along the main street were surf gear related. Small winding alleyways took us back down onto a large terrace with a couple of local cafe's overlooking the windswept beach where we watched the surfers getting battered by the waves as we drank mint tea for a small sum of 50p each. 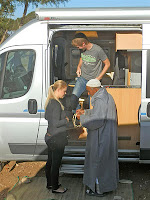 Back at the van there were plenty of opportunities to haggle with the steady stream of locals who seemed to be selling everything from fresh fish caught that morning to brightly coloured carpets and rugs. We had no space for carpets so opted for fresh prawns, 4 bream and Sophie took a shine to a pink braclet offered by one of the sellers. In true Moroccan fashion the price which initially was 10dh (75p) became 20dh when it was on her wrist, emphasizing the point we didn't have any more change (we didn't!) we rattled the mixed coins in our ashtray much to the delight of the seller who took them in lieu of the extra 10dh he wanted!


Enroute to campsite at Aglou Plage we were all nearly forced off the road, not by a crazy Moroccan but by an insane Frenchman in a nearly new A-Class Pilote. When we arrived Chris went to confront the maniac, but he had abandoned his van at reception and disappeared into the site. It seemed full when we arrived and it wasn't as close to the beach as our camping guide made out but after a bit of to-ing and fro-ing we actually ended up staying here for 3 nights. Chris and Adam decided on trying a bit of fishing but, alas, no tasty fish for the barbecue that night, good effort though chaps! We settled for some lamb steaks from the local butchers, topped off with courgettes and C+C's famous dauphinoise potatoes. 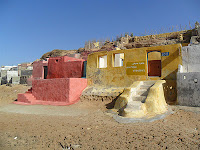 After a couple of lazy days we felt like some exercise was needed, it transpired that a short walk along the beach and round the cove were numerous old fishing huts built into the side of the cliffs. Most of them still seemed to be in use to a certain degree, others were crumbling away and had seen better days, whereas a handful had been decorated in bright colours and transformed into holiday lets.


Having stayed for three days we began to have itchy feet and set off towards Tafraoute.