Granada - We're back on the road! 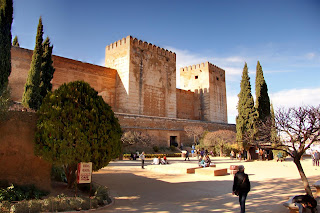 It's been over two weeks since we last posted a blog update on Europe By Camper but we decided not to bore you too much with updates of the family festivities and try and keep on topic and travel related. For those who are interested, we spent two weeks in Puerto de Mazarrón where the weather has been unbelievingly good and hit 20c on our thermometer every day, irrespective of weather forecasts. We've done practical things like empty and re-pack our van, wash and clean everything and do a few odd jobs but there has been plenty of time spent relaxing on the roof terrace also!


We walked 7 miles to Bolnuevo and back to visit Adam's folks who had a couple of days on the site there and also had day trips to Cartagena and Murcia to view the festivities and nativities and ate possibly the best Christmas dinner outside of England, cooked by a Dane with starters in a Swedish theme but the main course cooked to traditional perfection. The resturante was called Meson Madera and we'd urge anyone passing close by to visit (link to more information).

So the day before yesterday we bid farewell to Sophie's parents and went to catch up with Adam's at Granada before they set off for Portugal. With the cities aire being a no-go due to a new tram being put in, we headed for Reina Isabel who graciously accepted our 2012 ACSI discount card a day before the tariff was due to come into force saving us the books purchase price in just a two night stay. 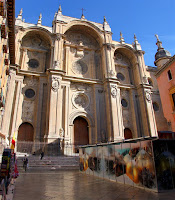 Granada itself is only a short bus ride away and the city is easily the most pleasant we have visited so far in Spain. With snow-capped mountains in the distance and strong Moroccan themed architecture it certainly felt different compared to anywhere else we have visited. The walled Alhambra provided great views over the city and the walled gardens were filled with autumnal colours.

The Moroccan theme extends not just to the buildings but also in the impossibly narrow side streets which were adorned with seemingly authentic traders selling their wears, the colours of the materials were very eye catching from the cafes and restaurants in the main squares. It was also the first day of the January sales here in Spain, which comes after the Three Kings celebrations on the 6th of January, and the queues and piles of discarded clothes surpassed anything we've ever witnessed back at home.
Posted by Europe By Camper
Labels: Spain