A+ A-
Print Email
It's been nearly a week since our last update. It's not that we're running out of things to write about, unable to access the internet or been lost somewhere in Morocco. We've been and done so much that the task of sitting down to describe it all has become daunting!

We arrived in Ait Benhaddou after a slightly tortuous drive through some Moroccan style roadworks, Catherine and Chris after already losing one wheel trim earlier in the trip had a second make a break for it on a particularly rough section. Opting for the guarded parking (25dh) with 15 Italian vans over the nearby campsite we piled in the first restaurant we found for a well deserved Brochette and Chips x4. 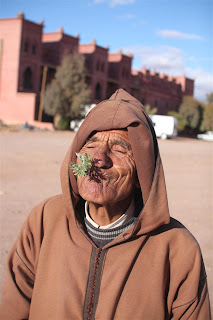 Abdul had already made our acquaintance on our arrival. Dressed in a simple brown Berber robe he made a bee line for us on entry and proudly produced a photocopy of a German magazine in which he featured to prove his caliber as a tour guide. We didn't need a guide, but Abdul was hilarious and game for anything so we negotiated for 70dh (£5) for a tour of the old town.

Passing the inevitable line of shops on the way to the kasbah, Chris almost emerges without his trousers since an enterprising Moroccan stall holder takes a shine to them and encouraged him to trade them for something from his shop. Another beckons us in and tries to pressure us into a £50 bracelet, which is later bought by Chris from another stall for just £6 an hour later. 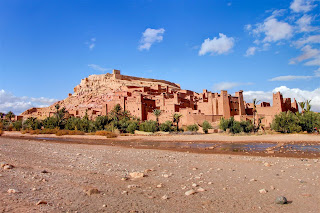 The kasr is a sight to behold and after crossing the river Abdul points out the old buildings from the new in between jokes and silly noises which nearly have us in tears. One of the beauties of building with mud is that it all looks the same, with whole sections having been constructed during its long history as a film set. The streets are steep and winding but the view from the top is impressive as the dark clouds clear allowing us to get some great shots on our way back down. We're not sure what we have learnt from Abdul, who has since found some Absinthe growing and is sniffing it vigorously, but we're happy to tip him 30dh for the entertainment factor alone!


We decide on a side trip to Telouet to see the Kasbah and impressive valley but the information we have to hand is unclear. Some say the road is fine but the man at the campsite in Ait Benhaddou, which we moved to the next day, seems to think we are mad to attempt it. We leave our van on site and head off with C&C to attempt it. Just up the road we spot a compound with two Moroccan men painting the bright road markers which you see all over the country.

We decide to head up the N9 and down the P1506 which as it turns out is perhaps the best way to approach it in a non 4x4. The road as far as Telouet is poor but we meet nobody coming our way, the road immediately after Telouet is treacherous but passable for 10km before turning into a brand new tarmacked oasis.

The only detraction from this is the incredibly narrow wooden planked bridge just before returning to Ait Benhaddou which is not so much narrow as it is a tricky decent with a low motorhome with an overhang Chris managed it without incident.


In Telouet we park outside an inn and are greeted by a young Berber guy who offers us a meal and, not feeling like eating from the van, we agree. The restaurant is freezing cold and deserted but a fire is soon lit and the food, rustled up from somewhere, delicious. Our host informs us he is a 'Berber Modern' and instead of a donkey he uses a 4x4 and drinks alcohol - this seems to be a common trend in Morocco! 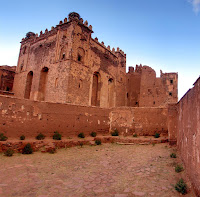 The Kasbah itself which originally belonged to the Berber Pasha from Marrakech (Lord of the Atlas) back in 1912 doesn't look much from the outside, we've seen our fair share now and we apprehensively hand over 20dh (£1.50) each as an entrance fee towards restoration. It needs it; the walls are crumbling and doors marked with a red X are a no go, the ceilings are caving in. Inside the mosaics are beautiful and unbefitting of the crumbling exterior. From the rooftop we view the snow topped mountains and the simple town below, it's cold and the children here are wrapped up warm but an extra layer or two wouldn't go a miss. This is one of the poorest towns we've come across. 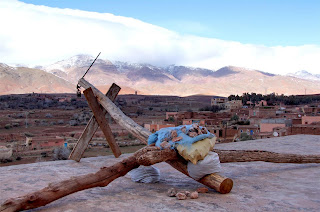 The road back to Ait Benhaddou gives rise to breathtaking scenery and given that the road is not even a year old we feel we are getting a preview of a simpler Moroccan way of life.