Menu
Home » Lithuania » Neringa and Nida - It's a Trap!

Neringa and Nida - It's a Trap! 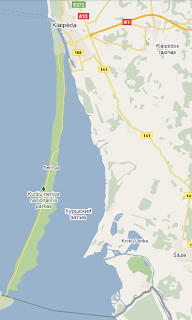 As we passed over into Lithuania the roads almost immediately changed to a smooth dual lane motorway - possibly our best roads since Denmark. We passed through Palanga which was a bustling seaside resort town similar to Parnu in Estonia. We stopped at the tourist information office who only seemed interested in getting us to stay and not very helpful with anything further afield so we left clutching a fistful of leaflets on beach activities which went straight in the bin.

We'd been trying to get some information on Neringa for a couple of days since Lonely Planet ranked it in it's top 5 and similarly our Eyewitness Guide said it was a must see but couldn't explicitly state why. The reason for it's popularity is largely due to the fact that it accounts for the majority of Lithuania's coastline and the lagoon which exists between mainland Latvia and Neringa is polluted and swimming and bathing is forbidden where as the island itself has miles and miles of blue flag beaches and clear sea.

I'm afraid I've got my 'tight yorkshireman' hat on for the rest of this post. We rolled up to the ferry and handed over £28 for a return ticket for a vehicle between 5m and 12m which is by far the most expensive ferry for the distance so far on this trip since the crossing is roughly half a kilometer. We thought that this would include entry to the National Park since you're getting the ferry there where else could you be going, right? Wrong! Once you've driven a few miles there is a toll for which a vehicle over 5m is required to pay a further £17 bringing the total to £45. It's a trap! To compound issues there is only one campsite in Nida which charges a further £25 a night - not that we had any intention of using it - we stayed at GPS: 55.4206, 21.05785 right next to the beach for free.

To get the negativity out of the way I'll go on to say that in addition to the costs many of the car parks in Nida and around some of the points of interest are further chargeable but you can bypass these by parking a bit further afield like we did. There is also nothing really there in terms of attractions - just lots of lots of sand and two pleasant villages. Even the tourist information office charged for leaflets!

On the flip side, there is a cycle track which runs the whole length of the park and cycle hire is available in Nida is as little as £10 a day. There are two beaches where you can wild camp for free on the western side of the Island thus avoiding the lagoon and we were joined by a couple of other campers on all nights. 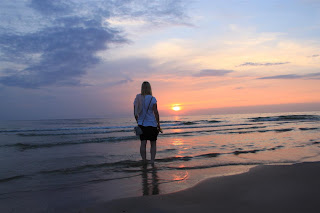 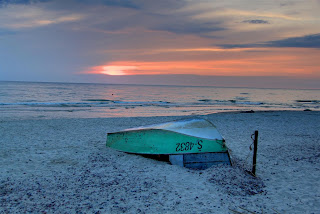 In total we spent three nights in Neringa and were fortunate that except for the last day the weather was scorching. We enjoyed the beaches and spent an afternoon walking around Nida stopping to have a lunch of Muscles and Seabass which were cooked fresh in front of us, the price was just £20 including drinks and a chocolate souffle to share so at least all the prices weren't extortionate. We visited the huge 'moving dune' which just looked like a large expanse of sand to us!

If beaches are what you're are looking for I would travel into Latvia and visit Liepaja's blue flag beach for free instead, but if you're desperate to get on a bike then I guess entry into the National Park would be worth it. Certainly if you're in a car the price is roughly one third of the price if you are over 5m which makes most of what I have said on cost irrelevant.

If you want to download the panorama of the sign (above) I took which is the closet thing I could find with regards to information on what is actually there click on this link (click) and choose 'Actions' and 'Download Photo' to get the full sized version.
Posted by Europe By Camper
Labels: Lithuania