A+ A-
Print Email
The journey along the Spanish coast from East to West has been fun and games for us. A lot of towns and cities are heavily populated with apartment blocks and industry and require a great deal of planning in order to navigate to a suitable parking area in order to explore. This is made all the more interesting since we are no longer just navigating our narrow panel van but also for the Autotrail Tracker (affectionately named our 'support vehicle') which seemed permanently fixed to our back bumper and just like a trailer it makes turning around when you've made a wrong turn that bit more interesting!

Castello-de-la-Plana for example yielded hooded youths and industry and so we didn't really feel like stopping, similarly Segunte despite it's promising castle seemed equally uninspiring and we drove on through. Most disappointingly of all was Valencia where the city centre 'aire' had increased from €16 to €25 per day and was sandwiched between a busy motorway flyover and railway station rendering it in our view totally unsuitable for an overnight stay. Unfortunately too late in the day for us to consider parking there for a few hours and with the only campsite closing that very evening we decided that fate was against us and headed for Carcaixent.

Somewhere along the way we picked up a Dutch registered camper which became a temporary addition to our convoy, as the road narrowed with 7ft walls either side he became alarmed when the Autotrail in front of him straddled the middle of the road around blind corners. We let on to him later that we had been a little way in front and had been letting Adam's parents know when the road ahead was clear over the radio so they didn't have to creep around the blind bends. It transpired that he had no GPS at all and simply decided to follow us as it was getting late and thought we must have been heading for an aire that he didn't know about!

As it turned out we couldn't have navigated to a nicer spot, the free parking location (GPS: 39.07027, 0.40889) was sheltered by trees and is the starting point for three 5 mile walks. Given our rotten luck with cities we decided the next day we would rest from driving and attempt the red walk which involved a 300m accent through overgrown paths which provided breathtaking views. 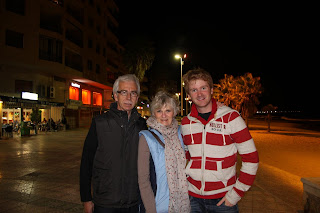 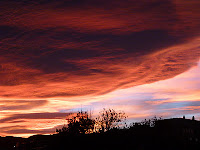 While we try and avoid campsites unless you find a particularly good launderette there really is no alternative to getting your washing done.  Calpe Mar in the ACSI discount book was paticually attractive to Adam's mum since the website showed an ironing board in the laundry room! It turned out to be a great little compact campsite with hard standing pitches, new facilities and a bargain laundry at €2 a wash not to mention a fantastic view of Penyal d'Ifac (that's the big rock to you and me). The town itself is relatively pleasant and we enjoyed a lunch of Shellfish Paella and Whitebait in one of the many restaurants touting for business along the seafront. It's warm at 18c and it's hard to believe it's only 8 days until Christmas!