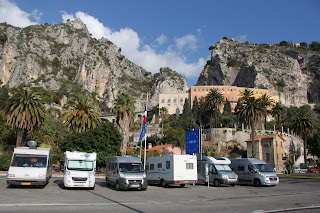 The journey into France from Italy passed without incident with the unmanned border now being reclaimed by motor homers as an impromptu aire. The coastline of the south of France is nice if a little manic and our route took us up and over behind Monaco rather then through it as on our last trip here in 2008. 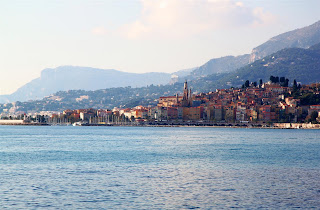 However just outside Nice a dramatic set of events occurred in quick succession. The van proclaimed it was low on oil which was strange because I had only checked it a few days prior. After immediately stopping and topping up a quick look underneath confirmed that oil was indeed pouring out of somewhere and had coated the whole bottom of the engine in oil. Contemplating getting recovered we noticed we were right next to a Fiat Professional agent, so we limped the van in and tried and failed to explain what we needed. "Catastrophic!" said one mechanic as he got into the passenger seat to move the van into the workshop, before switching to the correct side "No guarantee!". It transpired that the oil filter had somehow come lose spraying the whole undercarriage in oil and despite being in the workshop for over an hour we were charged just 30 minutes labour and €40 to fix - including jet washing the engine clean and refilling with oil we were on our way incredibly relieved at what could have been game over for the rest of our trip.

Later that day we met up with Adam's parents in Arles in their new Autotrail Tracker which seems a world away from our beloved Adria Twin. It was great to see them after 9 months away and they will now join us on this leg of the journey as we travel to meet Sophie's parents in Spain for a Christmas reunion.

In our new roles as tour guides (for an area we ourselves haven't visited!) we set off for Beziers before stopping at a quiet beach location near Sete with the shores awash with giant shells you can't help but to collect and then wonder what it is you are going to do with all these shells when you get home. Beziers itself christened the Tracker with it's first 'Wild' camping night, however nothing is truly wild in France when it comes to motor homing.

The following nights were spent at the recently relocated aire in Carcassonne (GPS: 43.2056, 2.37499) which while the old town is charming enough you can't help but feel it is missing something after visiting the likes of St Mont Michel or Monemvasia but nevertheless worth a visit (late evening being better since the aire is free 8pm - 8am with the first 'paid' hour free).

We will leave you with a photo of our miniature but perfectly formed Christmas tree which is now resident in our van until boxing day!