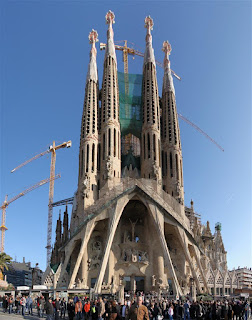 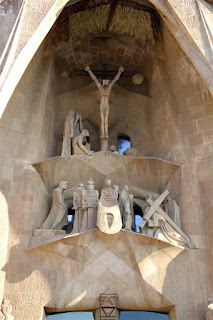 We had initially planned to spend a couple of days in Barcelona but the need of the group was to spend some relaxing time on the coast so we opted to try and pack as much as possible into one day. Sophie and I have grown a little tired of large cities on this trip but rest assured this is only a temporary condition!

The first sight on our list was the Sagrada Familia, one of the worlds longest running construction efforts spanning over 130 years and not scheduled for completion until 2026 at the earliest. Needless to say there were cranes and scaffolding from every vantage point so photography was interesting!

The Christmas markets which surrounded the church were packed with stalls selling logs with faces painted on one end and front legs of all different shapes and sizes. We thought they were Yuel Logs but on further enquiry they are in fact called 'Tió de Nadal' a charactor from Catalan mythology relating to a Christmas tradition and often reffered to as 'Caga tió' or.... Shit log! We like this name best. On Christmas day or Christmas Eve, a family puts their tió partly into the fireplace and orders it to "shit". To make him "shit", they beats him with sticks, while singing various songs of Tió de Nadal. There is more, but that's enough for now!

Back on the Metro we headed for The Rambles, the massive sprawling street which stretches down to the harbour in Barcelona and is famous for its 'living statues' which are all too common in European tourist hotspots.

There was a lively religious procession (we couldn't find out for what, but apparently is a very frequent occurance) and we enjoyed our first Starbucks since Stockholm. Adam's mum had spied her namesake turned into a Restaurant, 'Joan' seems a very popular name here in Spain. 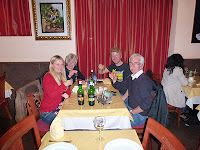 We visited Montjuic to find that the fountains are only operational once or twice a week in season and of course we had missed the day on which to see them. It was now turning to dusk and Barcelona was beginning to take on a much more multi cultural role with markets set out selling Indian snacks and mint tea. It was all too much for us and our intentions of Tapas and Paella faltered and we ended up in an Indian Restaurant and after a mix up with Sophie's 'hot' Khari being delivered as a sickly-sweet hot Korma which was whisked away and replaced we were soon sweating and salivating having missed hot food for so long.

Barcelona in a day is perhaps not to be recommended, it would probably take 3 days at least to do the city justice but was fine on this occasion. There was, for us, one final highlight. On the short walk back to the aire from the metro we stumbled upon a huge Primark with prices that would put even the ones back home to shame, it would have been rude not to top up on clothes!
Posted by Europe By Camper
Labels: Spain