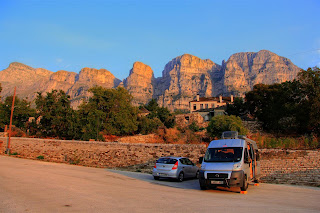 In exploring the Vikos Gorge area of Zagoria we made our way up to the small village of Papigo, the tiny village with the free Wifi connection we made our last post from. From there we walked part of the 03 route up to Micro Papigo in the gorge and back down the main road. We encountered some brightly coloured murals and more stone bridges before we walked back through the tiny cobbled streets of Papigo.

We were soon joined by a French demountable camper and a Dutch couple in their smart Dethleffs van. They had been to Greece many times and as we talked we found we had lots of similarities - they had a dashboard mounted laptop like ours with Autoroute and pushpins from a German site called Womo which we had seen but had forgotten about. They had a Realtek Wifi antenna, dashboard mounted camera - the list went on! We stopped comparing similarities after a while! We will be following their travels over on their blog (in Dutch): http://mm2greece2011.blogspot.com or Google Translated into English.

On leaving we couldn't resist a picture of our van up on the tiny bridge which we passed over to enter the National Park which Sophie took from down below! 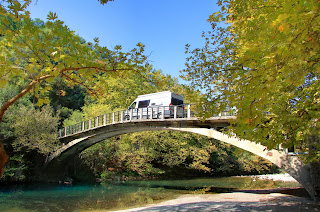 We drove as far Konitsa before heading to a Wild Camping spot recommended to us by Alex & David right on the beach near the Albanian border. We surprised ourselves by connecting to Wifi 18km across the water in Corfu, a record for us with our directional antenna. We stayed there two nights and got all of our washing done and had a campfire the second night as we were all alone.

The next morning we filled up with water from the shower using a funnel and hosepipe arrangement - much to the amusement of the Greek fishermen who arrived just in time to see the spectacle and to inform us that had we been German they would have charged us for the water!