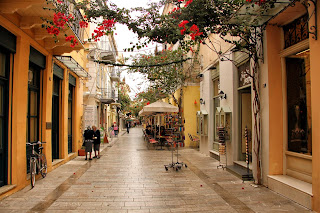 Nafplio is one of the largest town we have come across so far in the Peloponnese and certainly seems to be somewhat of an upperclass / party scene in season. There are so many 'posh' looking restaurants and bars bustling for your attention on the sea front that it is difficult to know where is best to eat. We settled for a small restaurant in the main square for the reason it had the most comfortable looking seats!

There is a small castle seemingly on a tiny island in the middle of the harbour called Bourtzi which dates back to 1473 to protect the city from pirates. The only pirates we saw were the countless shops selling Ray Bans and Abercrombie and Fitch knock off clothing!

We decided as it was grey and overcast that today would be a travelling day and we would do the 100 miles to Monemvasia in one go; meanwhile I decided that it was Sophie's turn to drive for a change! As it turned out the road was a little more challenging then expected as we opted to travel inland rather then follow the coastal road, but I'm proud to say Sophie expertly maneuvered the motorhome through tiny cobbled streets with only a tennis ball's width either side. A coachbuilt motorhome would have become wedged, that is for sure! (Video to follow). There was a monastery cut into the rock which reminded us of Meteora.

It was a nice chance to be inland after spending so much time by the coast, some of the trees are starting to chance colour now although the temperature is still circa 20c during the day and we hoped it would brighten up for when we explored Monemvasia.