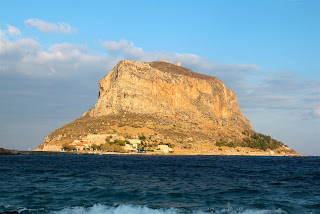 Monemvasia is the Greek answer to Mont St Michel but on a slightly larger scale. From the mainland it looks just like a large outcrop of rock with a small ruin on the top as the main town resides on the eastern side away from the mainland.

We arrived early evening and joined another van we had seen in Nafplio parked on the mainland since to park on the rock itself, signs informed us, would incur a €147 euro fine! The next morning we walked up the road and through the small entrance into the pedestrionised town with cobbled walkways and winding narrow streets with overhanging flowers and fruits.

Immediately we felt like we were back at Mont St Michel but it wasn't long until the Turkish influence became apparent from the long periods the town has spent under Turkish rule.

The lower town is awash with boutique restaurants, bars and hotels and an apparent mix of new build up and coming private residences. The builders appeared to be using traditional techniques, right down to donkeys laden with rubble lead through the streets.

The upper town affords magnificent views over the lower town and a chance to explore the largely ruined area, with the exception of a large Monastery named Agia Sofia which was restored in the 1950's after being adapted for various faiths during its existence. 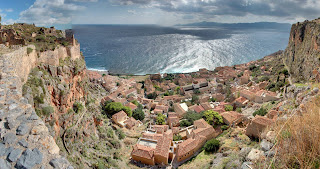 We feel fortunate to have visited it out of season, since given the number of hotels and parking capacity at the foot of the rock I can imagine the place gets uncomfortably busy in season. We had the place largely to ourselves and spent a second night back on the mainland being joined by two large French units we had seen a couple times previous on this trip.
Posted by Europe By Camper
Labels: Greece