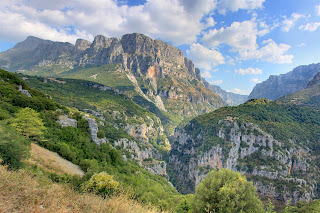 We moved on from Meteora to the Vikos Gorge, billed as the largest Gorge in the world, where we have been exploring it from various access points over the last few days. Inland Greece continues to impress us and by all accounts our guide book informs us we haven't reached the best bit yet. It is largely deserted except for the occasional out of season coach tour forcing their way down the narrow roads, something we knew we wouldn't see any more of when we almost had to fold our mirrors in to cross a narrow bridge in the Vikos–Aoös National Park.

The Gorge itself is almost too big to comprehend and it took a good few minutes standing at Oxia view point at the top of Monodendri for it all to sink in. Wild Camping seems easily achievable and indeed tonight we are parked in a small village of Papigo enjoying a fantastic view and guilt-free internet since the village, despite being at the end of a dead-end road, has it's own free communal Wifi connection!

The villages around the region are known for their traditional stone buildings with slate rooftops and cobbled paths, all constructed from local stone. There are also lots of old stone bridges dotted in and between the small villages along the Aoos River. There are plenty of single arched bridges which can be seen from the road and there is one near the village of Kipi which has 3 arches.

It's hard to believe in glorious 30 degree heat, although we have had a few occasional drops of rain, that it is almost October. Nature has a way of reminding you and some of the trees are already starting to lose their leaves, so we'll leave you with an autumnal scene.