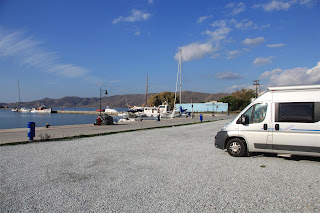 Evia is the small island which runs parallel to Central Greece connected by road bridge and several ferries. Given the timing to get to Athens, in one of the small windows between terrible weather and strike / protest action, we decided to spend a couple of days there.

Truth be told, there isn’t a great deal there. We had a handful of Free Camping locations but the areas were well worn from the summer season and the previous days rain and rendered them treacherous, so we instead opted for hard standings on or around marinas. The lack of visible taps lead to some creative engineering with a beachside shower in order to fill our depleted water tank!

We eventually reached the Islands most southern town Karistos which seemed lively enough and parked right in the centre. We opted to spend an evening in one of the many Taverna’s along the strip, enjoying some deep fried White Bait and Muscles along with the obligatory Greek Salad.

The next day we attempted to follow the coastal road but ended up literally in a maze of brand new roads surrounded by new pylons – but no houses. Obviously this area was expected to be developed during the boom years and has since taken on a new role as a trap for foreigners!

We eventually arrived at the small ferry terminal in Nea Styra, which had opened for the first time in three days due to strike action. We lined up in an orderly fashion between the marked lines, while the Greek cars proceeded to get into pole position each one pushing their way to the front of the queue with one even attempted to board before the cars had disembarked! The real fun began when it was our turn to board which caused a great deal of whistle blowing and arm waving since the ferry was not roll-on-roll-off, we had to board it in reverse!

We were now stuck at what to do, as we journeyed around the southern tip of the Athens region the weather further deteriorated. We stopped to visit the Temple of Poseidon which must be a popular excursion from Athens as the whole area was heaving which coach parties.

Then the heavens opened and we became conscious that we were getting closer and closer to Athens.

We eventually found a large beach area were we free camped on a cliff overlooking the harbour for three nights, taking advantage of the free Wifi on offer from a nearby closed beach bar in order to sit out the rain storms and watch some of our TV programs – back to back Motorway Cops, CSI, Spooks, Dexter, House for two days.
Posted by Europe By Camper
Labels: Greece