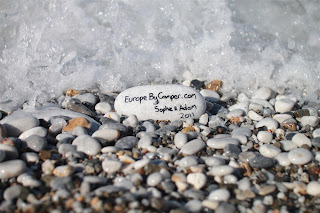 Not such a landmark blog post, but just one to keep you updated of our progress around Mani since visiting Monemvasia as we have headed round hugging the coast.

We haven't seen nearly as many motorhomes here in Greece as we expected to, having heard the accounts from others, perhaps we are too late for the summer season and too early for the people who come to Greece to spend their winters. We keep seeing the same vans; A Polish Burstner, German Hymer, Finnish Hymer and two large French A-Classes with a Miniature Schnauzer in tow.

Our first stop was to see the Dimitrios shipwreck which is also an excellent Wild Camping spot (GPS: to follow). where we spent the night. After getting battered by the sea in Monemvasia our van was thick with salt which by this point had baked on hard as the sun beat down on us.

The next day we heard the Finnish couple leave fairly early and we slept in and left to visit the town of Gytheio. As we arrived the main road which goes through the town was blocked off so we followed a diversion which turned out to also be blocked. A Greek policeman in motorcycle leathers and trademark mirror aviators came and told us the road was closed for an Ohi Day parade to commemorate Greek Prime Minister Ioannis Metaxas' (in power from August 4, 1936, until January 29, 1941) rejection of the ultimatum made by Italian dictator Benito Mussolini on October 28, 1940. He also told us that we were too big and directed us passed all the traffic for a prime location right at the front of the parade!

We sat and watched as processions of school children, scouts, army and fire brigade (followed by a British campervan!) before taking up a position on the pier with 2 and eventually 5 other vans staying the night. 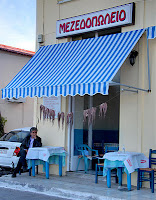 The town appeared to be made up largely of fish restaurants and the smell of fried squid lingered strongly in the air. The cafes were bustling with people following the parade and we were given a taste of what Greece must be like in season, since a lot of the towns we have visited have been very quiet and lacking much atmosphere.

The next day we drove to Cape Tainaron which is the most southern point of mainland Greece and stayed in the tiny village of Porto Kagio where we had GPS co-ordinates for a place to stay but were greeted with a 'No Camping' sign, however underneath was a 'Campers this way' sign directing us along the beach to get to the car park.
Given the last time we drove on a beach it ended up with four different nationalities pushing our van out of the sand we drove very carefully and were welcomed by a Greek lady who owned some cottages who said we could stay in their car park 'No Problem' - clearly the village has mixed views on Campers overnighting there and we enjoyed a curious cappuccino (Greek coffee and squirty cream!) in her Taverna.

From the bottom we drove up the west coast, stopping intermittently to view fortified settlements, pebbly beaches and to usher the local wildlife out of our window when they became resident on our dashboard!