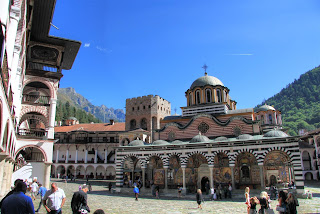 Our route through Bulgaria, essentially travelling from the North East corner and exiting via the South West means that we are going to miss a couple of what would otherwise be the 'must see's' - those being Nessebar and Belogradchik. We've also decided on this occasion to miss out the capital Sofia - the first time we have missed a capital city in any of the countries we have visited. After nearly 14,000 we feel that we're ready for the second leg of our trip - which is to relax and unwind from the stresses that prompted us to embark on this trip in the first place. As much as we love touring around it is nice to have some down time also and for that reason we're ultimately making our way to the sun in Greece.

Bulgaria has presented us with a bit of a challenge. Unlike some of the other countries we've visited where you roll up and instantly absorb the culture and architecture by comparison Bulgaria is taking a little getting into. That's not to say that it's not a worthwhile place to visit, but it doesn't smack you in the face and a little effort is required to scratch the surface - but do as we did in Veliko Tarnovo and you will be rewarded.

After a long drive in our daytime rain storm of the trip and typically just after Sophie had taken over driving we arrived at Camping Zodiac. Typical of an Eastern European campsite it catered largely for wooden huts and motor homes have been a bit of an afterthought. With hindsight we could/should have wild camped but we were tired and everything looks a bit grimmer in the dark.

Rila Monastery was impressive and by this point we have seen countless places of worship. This one, like many others, has made it onto the UNESCO list and given by the amount of armed police present with their own little watch hut inside the main compound Bulgarian's take its importance seriously. We felt a little out of place admiring it for its architecture rather then it's religious significance. Fresco's adorn most of the exterior walls and the interior (no photography allowed) was equally impressive. We were also surprised to find that entrance was free, except for parking should you wish to park right outside the door.

On the road to Rila there is a small yard with some really interesting old cars stacked two high and other salvaged materials such as fire places and wooden carts, I daren't go in because I could have probably spent a day photographing the inventory!