Just two of our Wild Camping Locations so far. 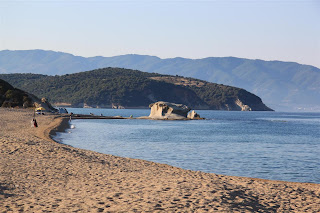 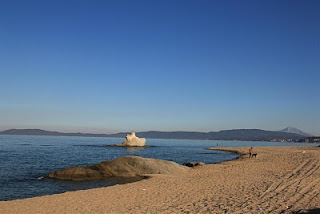 We've arrived in Greece perhaps a little earlier than we originally anticipated, having spent six months travelling through Europe now is the time for us to relax and reflect on our journey so far. The purpose of this trip was not to see everything, but to leave something to return to and we have already begun thinking about future routes possibly taking into consideration some aspiring EU members.

Istanbul was high on our to do list, however we've decided to put that on hold for the time being. As the gateway to Asian Turkey we will have to pass through it to explore that part of the world in the future so we've put it on hold until then. Our current insurers don't cover us for the Asian side anyway and we are wary of our vans residuals if we do too many miles. That said we are considering spending christmas in Spain! With that in mind and with work picking up for me (Adam) we have been slowly travelling around the Greek coastline from Stavros to Porto Koufos in just over a week.

First impressions of Greece are that despite arriving in September to heat in excess of 35c it is very much out of season with many restaurants and villas closed up locked down. The beaches are deserted despite warm waters but we have had other motorhomes for company most nights - but typically no English!

Prices are also more then we anticipated, as loyal Lidl-ers we made a bee line for the first store. Lidl is largely the same wherever you visit but the prices in Greece are easily 40-50% more then what we have been paying with meat nearly double that of neighbouring Bulgaria. This explains all the Greek registered cars in the car park at Lidl in Petrich (just over the border in Bulgaria) selling Greek Feta and Olives back to them at prices cheaper then home. In fact the roads were lined with Olives and Cheese all the way. Diesel is also 20p dearer at £1.28 vs £1.08 in Bulgaria.

Our only real barometers of expense are Supermarket food and diesel and having spent several months in Eastern Europe we need them re-calibrating since I'm sure these prices are on par with the likes of France and Spain. The roads are certainly better and Wild Camps are easy once again. We've seen no resorts on the scale and madness of the Black Sea and the waters are warm and clear - we're not really beach people but its been great to be able to unwind. The only question remains - why aren't you here yet?