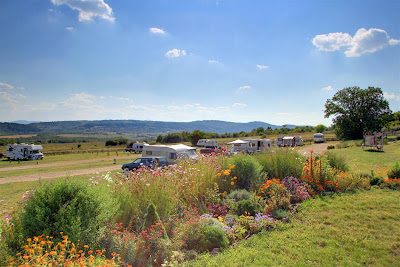 We finally left Romania and travelled a mammoth 270 miles down the Black Sea coast and towards the town of Veliko Tarnovo to a campsite we had read about on MagBaz. Probably one of the longest drives so far on this trip and we were having a bit of nightmare with both our dash mounted laptop and our TomTom GPS dropping signal and sending us down farm tracks!

Eventually admitting defeat we called the campsite and Nick came out to meet us in the village and escorted us back where despite swearing blind their GPS co-ordinates were wrong (they're not, sorry guys!) we were relieved not only to find a great camp site waiting for us but also a bar with draft beer and an outside terrace. We've never felt the need to endorse anything so publicly with our blog but credit where credit's due Camping VT is probably the best site we've stayed on at home or abroad.

After six months on the road with desperately few native English speakers it was a surprising relief to be able to have conversation with people other then ourselves! In that respect Nick and Nicky were the perfect hosts and have plenty of stories to tell of their own road trip around Europe and the journey that lead them to setting up a camp site which has got to be the best in Bulgaria. You find that the kind of English people who make it this far into Eastern Europe all seem to be of a similar mindset and we got on well with all the other campers we spoke to, often chatting late into the evening.

The site consists of a shower block which wouldn't look out of place in a luxury apartment, 40 pitches each with their own 16A power supply and drinkable water supply, a swimming pool built for the 2011 season not to mention breathtaking views of the surrounding mountains. We paid £11/night out of season without electric but still enjoyed heat in excess of 35c. One of the biggest bonuses for us was the Cafe Bar which serves a mix of Bulgarian and English cuisine with local wine and beer at Bulgarian prices so there really is no excuses for not treating yourself. 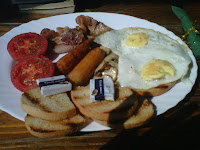 I can't begin to tell you how good a full English breakfast tastes with real bacon after such a long time away from home! You realise just how welcoming Bulgarian's are when you see how the locals have warmed to both the Cafe and Swimming Pool which I can imagine can get quite busy in season but the pool is open to residents only in the evening if you fancy a quiet dip. 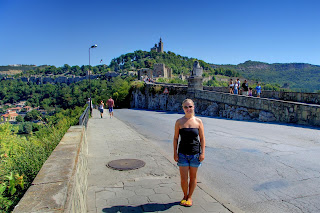 The nearby town of Veliko Tarnovo is a great place to explore and the campsite has a local English speaking taxi driver named Dimitar who is able to take you into the centre for a fee of just £4.40 and provide you with excellent commentary and recommendations en route.

We probably didn't see half of what the town had to offer since we were suffering a little in the heat and so retreated into a local restaurant where we stuffed ourselves for under £15. It's hard not to get side-tracked by the estate agents offering properties for next to nothing by UK standards and indeed a couple of the residents on the campsite were in the process of doing just that.

Sat here checking the bill I've noticed that I've not been charged for two portion's of Nicky's delicious chocolate cake! Keep the tab open guys, we'll try and be back soon!

For more information visit Camping Veliko Tarnovo's website and don't get it mixed up with another local campsite who's underhand tactics have seen it taking on a similar name to cash in on their reputation. Ask for Nick or Nicky by name and tell them Europe by Camper sent you!
Posted by Europe By Camper
Labels: Bulgaria