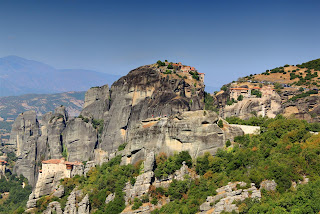 Just to let you know we have updated the Wild Camping page and we will be updating the country guide over the next few weeks to be in a much simpler format with all the information and experiences we have had.

It's hard to believe we've been in Greece two weeks and we've only just filled up with Diesel for the first time. Fueling our van has never been an issue however we've found that many large forecourts don't accept credit card (a first, since every eastern European one did) and many don't even bother to display the fuel price outside which can vary as much as 20c. Many stations situated in towns are two pumps with long hoses which reach out onto the road and getting someone to come out and fill up your van can be a challenge!

We've had 24 hours of storms so we battened down the hatches and had a couple of duvet days just outside Thessaloniki. We'd read some fellow bloggers Lesley and Rob having enjoyed a visit there and we were keen to make an attempt to get into the city which we did but we concur it was a nightmare and once we pulled up to see some of the attractions were surrounded in 'Looky Looky Men' with their fakery we bid a hasty retreat.

We instead decided to drive across to Meteora and we rolled up to Pension Arsenis which we had heard of from a number of tips for the area. The hotel has enjoyed some success in the German motorhome community after it was published in a guide or magazine there as allowing motorhomes to stay over night. We had thought that the 'catch' would be that you would need to buy a meal, however after a long drive we didn't feel like cooking. Immediately upon arrival, in the company of three other vans, a large guy rolled up on a Moped and was very friendly and asked did we want Chicken or Pork! It transpired that rather then walk 50m from the hotel to our van he had chosen the Moped as his preferred method of transport!

The food was delicious, a large Greek Salad and chicken in his mothers special sauce as well as a mountain of chips and local wine. We coined a new phrase, which he kept using after every item was delivered "Best for you!". Sophie didn't quite take to having her hair and her face stroked by the guy each time he walked past and so when the other guests had left and we were invited for Ouzo's we made our excuses and headed back to the van. Total cost €25 which I suppose isn't too bad as he said he was happy for us to stay two nights no further purchase required! 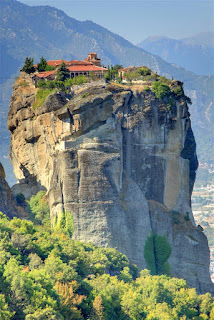 The Monasteries themselves are unlike anything we've seen as most date back to the 14th century. You approach from an otherwise totally flat landscape and see these huge rock faces appearing before you in all kinds of strange and narrow formations. It is only when you start to climb up to them do you start to see the small buildings that have been perched and cut into the rock. 20 Monasteries existed at the beginning of the 14th century, however today only 6 remain preserved and inhabited by monks and nuns but are mainly tourist attractions.

From what we saw today we would recommend an early start or perhaps doing them in reverse, the furthest one first, since even out of season as it is at the moment they were flooded with coach parties. We went inside the Holy Monastery of Rousanou but they are so small and not designed to accommodate the huge numbers of tourists that push through them and as photography is not allowed we decided not to enter any other ones, they are best viewed from the outside.