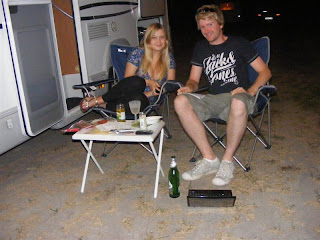 Today we drove 350 miles from Czech to Budapest, via Slovakia. The
motorways in Czech were pretty hard going, being made up mostly with
paved concrete so we had to drop our speed down. We'd like to have
explored a bit more of Czech but there is pleanty of time for that! We
were thankful that the roads in Slovakia were tarmac and we were able to
make up our lost time. We stopped at a Tesco in Slovkia to stock up on
essentials (beer, cured meat, olives, cheese!) before crossing the
border into Hungary where we bought another vignette - can hardly see
out of the windscreen now for them!

No pictures of Budapest until the next blog post unfortunatly as we were to busy navigating the
traffic (I'll be sure to get some pictures on the way out!) and the
directions for the campsite were a bit vague... the campsite is on the
street that it says it is but its entrance is down the next street
(http://www.hallercamping.hu/).

Tomorrow we'll be getting the tram into Budapest and will report back
with pictures, we're sat outside the van with some food, it's been about
30 during the day and now its got to be 18 or so with a cool breeze.
More tomorrow!
Posted by Europe By Camper
Labels: Budapest, Hungary