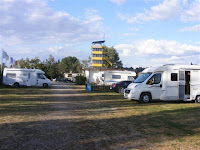 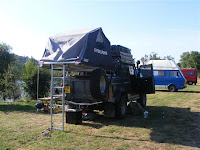 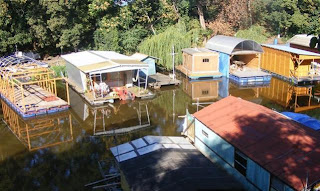 The drive to Prague was steady going and we made good time. We pulled over to get our Vignette and once we set off again the roads were pretty rough compared to those in Germany. The roads on the approach to the campsite were pretty poor and we were bouncing in and out of the grooves created by the lorries. The final approach looked like something from the 1970's, on one side of the island is old seats and buildings which look like they are something to do with boat races and on the other side between the island and the mainland are houseboats which people were building. We arrived at the campsite about 4:30 (50.05521, 14.41321).

Despite initial concerns the campsite was clean and tidy and reception helpful and friendly and spoke good English (just as well as the only Czech words I can remember are for special occasions only!) and was
clean and tidy with good views - although communal showers!. They did however sell beer at 15kc a bottle (less than 50p!)

The campsite is on an island (seriously!) but does however have great links to Prague, a bus and a tram right outside. We need to take the number 14 tomorrow and a 24 hour ticket costs just £3.50.

We were joined in the evening buy a double cab Land Rover with a fold out tend on the back. Two lads had just been to Bosnia and Croatia and were stopping at Budapest and Prague on the way home – now that sounds like a proper adventure!
Posted by Europe By Camper
Labels: Czech, Prague