A+ A-
Print Email
We've probably surprised everyone, not least ourselves, by still being at Lake Bled 9 days after we arrived. The truth is the weather is just so beautiful we can't bring ourselves to up sticks and leave until today, when we need to head back to Hook of Holland for the ferry.

We've had a good pitch and while we'd have loved to visit the Triglav National Park again, it's simply too hot to do any serious hiking - which we'd like to do. We've driven 1,200 miles to this point, so we're going to make the most of it before we return to the height of the Motorhome Show season and the NEC in October. At the shows we attend we chat to lots of people who followed or read about our year long trip and there is a great community feel. Still, we're never quite sure how to react when people walk over to introduce themselves. 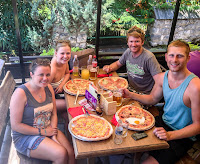 "Hey, we're here because we followed your blog!" came a voice and across strode a tall guy a similar age to Sophie and I with an outreached palm. Steve and girlfriend Emily have been traveling Europe for two months with two months left to go before they hit Australia. They had seen some of our pics we've been posting on Instagram and thought that we were heading in this general direction.

It's been great to have some unexpected company out here and even more so when you're all of a similar mindset. They had picked up a great Mercedes Sprinter panel van christened 'Bert the Merc' and loaded it with all the outdoor gear we've been promising ourselves we'll one day get into. You can check out their blog by clicking here: Bert The Merc. 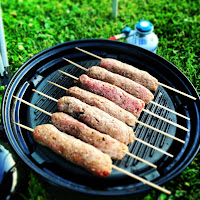 Safe to say that the BBQ got some hammer over the forthcoming days, when Steve and Emily were introduced to our staple of Indian themed BBQ food; home made Seekh Kebab and Tandoori Chicken are almost always present on our grill! 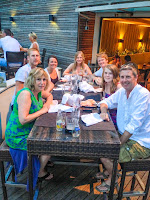 It's not just new friends we've made here at Bled, Steve, Mandy and Melissa from Brit Stops called in for one night on their way back from Hungary. They're on a whistle stop tour of Europe in their new Frankia. The campsite was so full that they had someone turning people away from the roadside, but fortunately a van had left next to us in the unmarked area and so we were able to get them through the roadblock.

So, an apology to those who had expected an epic adventure or a repeat of our 10 countries in 21 days tour in 2009. We've failed to blog about an adventure, but instead brought you along on our two week holiday to one of our favourite places in Europe. We've had 9 days of wall to wall sunshine and tomorrow is set to rain, so we must have done something right to deserve this.

With two more Vignettes purchased for the return journey, we'll be lucky to see out of the windscreen on the way back! I've lost track of the amount of time we've spent in a road and racing cycle shop while we've been away and so perhaps we'll just buy a cheap or second hand road bike and see how we get on with them to begin with. 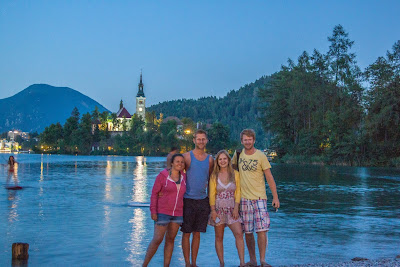