We purchased our 2007 Adria Twin shortly before it’s 3rd birthday and owned it for just shy of two years. In that time it received more use then many, having spent over 370 days occupied by us with 334 during our 11 month tour of Europe. It seems the Twin is a popular van; one of our most popular and earliest blog posts is our Adria Twin Modifications and Improvements post and has received over 5,000 views. 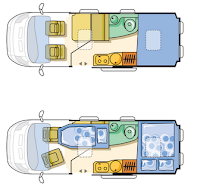 At 5.98m, a panel van conversion might seem like an odd choice for a year touring Europe. Many who full-time or travel “long term” often choose vehicles much larger in size and with a bigger, all important payload. By comparison I recon we travel fairly light, but we still managed to take loads of stuff with us which came back unused a year later!

The fixed rear bed layout while still relatively unknown in the UK (where the “rear lounge” is king)  is the most popular selling panel van layout in Germany and was pioneered by Adria on the X244 Fiat Ducato, but the extra width and length of the X250 Ducato really made the layout work well. It has been replicated and reproduced by over 10 different manufacturers, of which only a few other than Adria have started to make their way over to the UK. 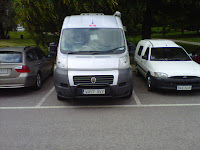 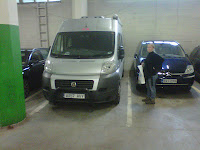 The Twin makes light work of parking everywhere a regular car would
- including underground parking garages!

While motorhoming is often about compromise we never felt we had to make one in the Twin. For us it was the perfect combination of being able to squeeze into regular car parks in towns, cities (and even underground parking!) and we even used it to wild camp in the centre of 7 capitals cities. It also meant that all of the ferries through Norway and also the Denmark to Sweden Storebaelt Bridge was the same price as a car, saving us over £350 in tolls overall.

One thing we would not be without. If we ever felt like lounging we’d hop on the bed and watch a film and when we did want to go to bed there was no “setting up” or “putting away” required. There are also masses of storage space underneath the van which only a fixed bed can give you. We utilised this with 6 large stacking boxes which fitted perfectly, with four being accessible from inside. The bed also lifts up so is great for carrying bikes or even moving furniture when at home!

The ability to fully utilise the cab seats. Many panel vans (rear lounge vans especially) lose all functionality of the cab and driver seats. This is a shame because you effectively gain half a metre of living space and two of the most comfortable high backed seats in the van.

The large gas locker meant we could take 2x 11kg refillable cylinders equating to 44 litres of gas. Gas consumption when off hook up worked out to just under a litre a day to run the fridge, hot water daily and ad-hoc heating. An under slung tank is of course an option, but we already had a 2x 11Kg Gaslow refillable system. 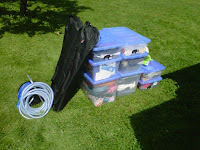 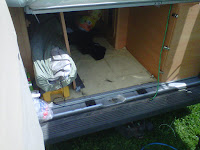 It's not the size that matters, it's how you use it. Under bed storage was maximised through the use of
stacking boxes and a partitioned area for chairs, screens and ramps.

The 80L waste tank also helped with wild camping. Our 90L fresh usually lasted us 3-4 days even with a shower daily or every other day thanks to a trigger action shower head we installed.

We didn’t like the tambour door on the bathroom and in the bathroom cupboards. A good idea at the time but we much prefer the solid wooden door in the Globecar as these start to fail over time and can rattle fairly badly and fall apart.

We’d swap the wardrobe for a full size fridge/freezer as found in the Trigano Tribute 650 and some pull out storage underneath, although many might be grateful for the hanging space.

While two rings are perfectly adequate, a larger cooking area for long term touring might be advantageous. The grill was surprisingly versatile, cooking fish, meat and chips.

Of course, a few things we changed ourselves! Check out our Modifications and Improvements post.

The van is a perfect if you are active and don’t want to spend several days at a time lounging around inside, but as a drive, explore, eat, sleep vehicle it is first class. Ours covered nearly 30,000 miles in our time of ownership and the build still looked fresh and new when we came to sell her with over 44,000 on the clock which is a testament to the build quality of these vans.

Posted by Europe By Camper